There may be a number of reasons why you have been referred for further investigations – you may have gone to your GP with symptoms or you may have a family history of bowel cancer. But whatever the reason, the specialist will choose from the range of investigations detailed below and explain why the test chosen is best for you.

Some investigations and treatments are available in both public and private hospitals. Ask your GP which treatment path may be the best for you.

During this procedure, if the doctor sees anything that needs further investigation, samples (biopsies) can be taken for examination in the laboratory. Sigmoidoscopies can be done in an outpatient clinic and do not require an anaesthetic or sedation. 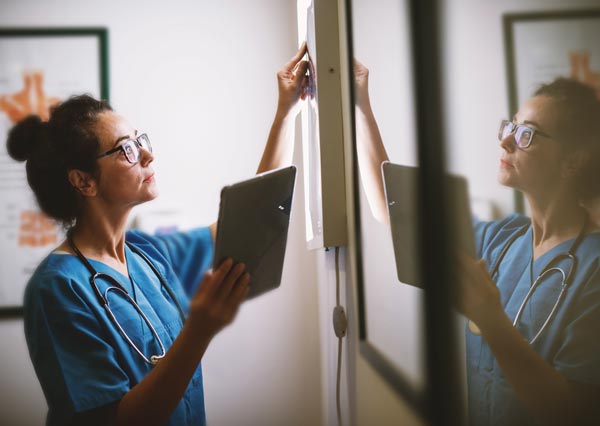 A colonoscopy is an examination to look at the lining of your bowel to see if there are polyps or a cancerous tumour in the bowel. A long flexible tube (endoscope) with a bright light and a camera on the end is inserted through your back passage and enables the doctor to get a clear view of the bowel.

A specialist nurse will explain what a colonoscopy involves, and will tell you about the bowel preparation you will need to take before the procedure. This preparation makes sure that the bowel is empty to allow the doctor to perform the examination effectively.

The nurse will ask you about any medical conditions (e.g. diabetes, kidney problems) that they need to be aware of prior to you taking the bowel preparation.

During the test, if the doctor sees anything that needs further investigation, photographs and samples (biopsies) can be taken.

CT Colonography is a test using a CT scanner (CAT scan) to look for polyps or cancers inside your large bowel. It is sometimes called CTC or Virtual Colonoscopy. In many hospitals it is used as an alternative to colonoscopy and has similar reliability for detecting cancers and pre-cancerous polyps.

To prepare for this test you need to have a bowel preparation using laxatives then take a contrast drink to line to inside of the colon. During the test a small tube is placed inside your bottom and gas is inflated to open the colon. This will help any polyps or cancers become more visible. You will then go through a CT scanning machine, which will take less than 5 minutes.

The test itself is not usually uncomfortable, but the gas that is inflated into your colon can make people feel bloated and as if they have trapped wind.

It is extremely rare to have any side effects from the procedure but there is a remote possibility that the gas could rupture the bowel, or that you could have an allergic reaction to the contrast. The procedure is generally thought to be more tolerable and has fewer risks than traditional colonoscopy.

Although the scan is focusing on the bowel, sometimes the doctors looking at the scan notice things next to the bowel that they weren’t expecting. These occasional incidental findings sometimes need further tests to be certain what they represent.

The majority of CT colonography is performed after a full cleansing of the bowel with laxatives. For those who would not tolerate a full bowel cleansing, marking the stool in the bowel with a special drink taken with each meal means CT colonography can still be performed. This may be appropriate for those who are elderly or who have multiple medical problems.
CT Colonography is a very good test for picking up cancers and large polyps. It is not as good as colonoscopy at detecting small polyps, but small polyps are not thought to be as important as the larger polyps.

CT Colonography is considered by most doctors to be a good test for detecting possible bowel cancer and is an option for many people as an alternative to a colonoscopy.

Discuss with your doctor whether a CT Colonography might be the right test for you.

Being diagnosed with bowel cancer may come as a terrible shock. Many people describe everything being ‘a bit of a blur’ when they are told.

As the news sinks in and you are ready talk about what’s going to happen, the most important thing to remember is that it’s your body you are discussing. Don’t be rushed into making decisions and don’t be frightened to ask the doctor to explain things more than once if you don’t understand. You may also wish to request a second opinion (see below).

Your cancer has a whole new language and it is going to be a while before you understand it all. The experts treating you can sometimes forget this – don’t let them!

Here’s a guide to what you can expect to happen next:

The doctor will choose from a range of investigations including blood tests, X-ray, CT scan, MRI scan, PET scan and ultrasound, and will explain why you need to have these tests done.

Putting together your treatment plan
Once your doctor has received your test results, they will be able to discuss your diagnosis fully with you and will put together a treatment plan, which will depend on a number of factors including the type, size and location of the cancer and your general health.

Most specialists who work with bowel cancer will discuss their patients with other specialists in a ‘Multi Disciplinary Team Meeting’. This means that several doctors will have reviewed your investigations and talked about the best treatment. These meetings help doctors offer patients the best possible treatment. You should ask if your treatment plan has been or will be discussed at one of these meetings.

All decision-making will be done jointly between you and your medical team. It is very important to discuss with your doctors the advantages and disadvantages of what is being proposed so that your individual needs and wishes can be fully considered.