Home > About Us > Ambassadors > Alan Sciascia 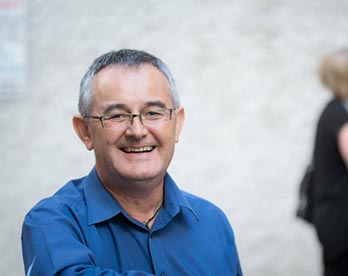 Having made it past 60 relatively unscathed, Alan Sciascia had no real concerns with his health. However, late in 2015, after suffering intermittent bleeding in his stool, Alan was diagnosed with stage 3 bowel cancer. Within weeks, he commenced chemotherapy and radiation to shrink the tumour prior to surgery, then in late August 2016, he underwent successful surgery. Successful because his original diagnosis of stage 3 turned out to be stage 1, which meant everything was contained within the bowel wall.

“My transition from bowel cancer sufferer to cancer survivor was partly due to the skilled surgery from Dr Janet Ansell, and also to the fabulous service from Tauranga Hospital’s Oncology team and Kathleen Kilgour Centre … not to mention my wife,” he says.

Now he’d like to give back by helping Bowel Cancer NZ to “spread the word to others, raise awareness of the prevalence of this silient killer, alert others to the early symptoms – and importantly, make people aware of the great support and services available through Bowel Cancer NZ to those diagnosed and their families.” 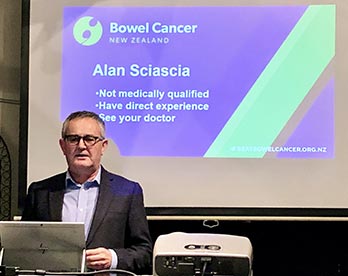