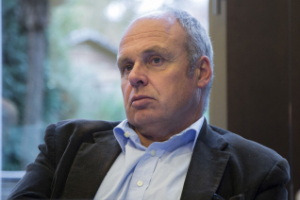 Professor Frank Frizelle is a bowel cancer specialist, Professor of Surgery, the Editor in Chief of the New Zealand Medical Journal and he is also one of Bowel Cancer New Zealand’s medical advisors.

Frank treats people with bowel cancer almost every day and spends a lot of time researching causes, treatment and outcomes. “Most bowel cancer is sporadic, not inherited,” he says. “And in fact, less than 10% of bowel cancer is likely associated with a  inherited genetic predisposition , so the way you live does have an impact. Exercise is good for you for many reasons, including weight control.  Healthy living definitely makes a difference, but then young, fit people can also get bowel cancer.

That’s why if you have any symptoms, it’s vital get them investigated, no matter what your age,” he says. “And keep getting checked if you’re not happy with the diagnosis. Many bowel cancer symptoms fluctuate – they can come and go – so it always pays to get checked if anything is bothering you.”

Frank has been advising Bowel Cancer New Zealand for a few years and is very proud of the work they do in advocacy, research, education and patient support. “Bowel cancer is New Zealand’s second highest cancer killer. So our advocacy work in getting home screening kits off the ground is already helping to save lives. But there’s still so much more work to do.”

Frank believes education is key, particularly for men, older people and those who live in rural areas. “It’s fantastic that New Zealand is now rolling out home screening kits, but so far it’s only reached about half the population – it’s not happening fast enough. The people we’re failing are those who are in rural locations or not well off – they just aren’t aware of the symptoms of bowel cancer. So it’s about spreading the word in those areas. And many older people aren’t Internet savvy, so it’s important to get the message out there too.”

Recently, Frank led a research team that discovered links to bowel cancer from a toxin producing carried in the gut. This discovery means that people can be screened for the bug and a lifesaving treatment can be developed – a world first. In 2018, Frank received the NZMA’s highest accolade, the Chair’s award, for his outstanding contribution to health in New Zealand.