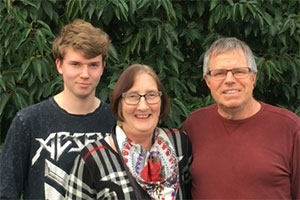 Kia ora my name is Suzanne and I was diagnosed with Bowel Cancer in October 2006 when I was 46.

They say hindsight is a great thing and that is true. I now realise I was showing signs something was not right back on January 06. I realised something was wrong about July 06. I was going to the toilet about 10 times passing little marbles in the space of a couple of hours. In August the pain started, I would almost double over with the pain and have to rush to the loo where I would pass a little marble of a poo. As for the hindsight, earlier in the year, I was working in a job which got quite stressful and when I get stressed I don’t eat and lose weight like a click of the finger. I had changed jobs and was loving my new job. My intake of food had gone up yet by the end of the 3rd term of the school year I was still losing weight. I had gone from 50kg down to 43kg and just before my big operation, I was 41kg. One of the symptoms of bowel cancer is weight loss.

I went and saw my GP and had blood tests. My iron count was down but that seemed to be quiet normal for me. All other tests came back in the normal range and the Doctor said there was nothing sinister there. She sent me off to a specialist thinking I was looking at irritable bowel syndrome. Thankfully we have medical insurance so I was seen very quickly. We have a son who was a surprise at 40 so was only 6 that year. The day of the specialist appointment all our normal babysitters were unavailable to look after him so I took him to the appointment with me thinking its irritable bowel syndrome.

The specialist asked me all these questions, one thing he picked up was the low iron count. He asked if I had blood in my poo. I had had earlier in the year gone to the loo and had some blood loss with the water in the toilet turning red but that had happened only the once. He did an internal examination of the back passage and then said he had found a problem. There was a lump and it would need to be removed. He asked about family history of bowel cancer. My maternal grandfather was discovered to have had it when he died of a stroke. His eldest daughter my aunt died of it a couple of years earlier but he said they were not close enough to me. My age also counted for me as I was considered too young for cancer only being 46. With a six-year-old in tow I had to face having a lump and no one to talk to. I could not contact my husband. I ended up at his work and his workmates were wonderful and took our son, and one of the girls rung one of his work team and asked if he was with her. When she said yes, they told her to pack everything up in the field and bring him back to work now, then they talked to him and told him he needed to get back to work.

Later that same day my parents arrived from the South Island. The following week I was booked into a private hospital and had a colonoscopy to take a sample of the lump. It was great having my parents there to look after me that day and to look after our son. I believed everything was going to be alright. My parents left a week later and Mum came back up when I was due to leave hospital to help us while I convalesced.

The following week we saw the specialist and the results had come back that it was cancer. I was booked in the following week to have a bowel operation. From first going to the GP to my operation was 1 month. We firmly believe it was because we had medical insurance that things moved quickly. We had a friend who was diagnosed with Prostate cancer about a month before I went to the GP and was told he would be seen as quick publicly or privately. Here was I in and out and he still had not been seen. He went privately and was in hospital 2 weeks after me.

The worst thing about the operational was having to take the stuff to clean your bowels out. I think because it was the second time in 2 weeks I had a bad reaction to the stuff and spent my time sitting on the loo with my head in a bucket going both ends at once. I could not even keep water down. When I arrived at the hospital they put me straight into a room and onto a drip before I was taken to the operating theatre. I had a metre of bowel removed. I can no longer drink anything ginger in it, without feeling sick.

After the operation, the specialist came to see me in my room and was pleased about how good I was looking. He remarked how awful I looked when I first arrived. I shocked him by saying “ If you had come in with a coffin and told me there was nothing you could do I would of quite happily have climbed into it” He told me he thought they had got it all and the lump had just turned when he looked at it.

Ten days later I went back to have the staples taken out, my tummy still does a turn thinking about that. The specialist informed my husband and me that the cancer was found in 7 of the 14 lymph nodes and I would have to undergo chemo. I was given a 10% chance of it not coming back.

We went and saw an Oncologist and I was offered a chance to go on a drug trial down in Palmerston North, we live in Havelock North. It would mean going there every two to three weeks for two to three days at a time. They said that they believed it would give me a better chance of survival, but I could have chemo here in The Bay which would be for about an hour in total once a week for 30 weeks. The Oncologist said that the decision was mine.

My husband is a scientist and he looked everything up on the internet and believed I should go to Palmerston North. But we had a 6-year-old son and no family here in The Bay to help out, although my mum helped out for a couple of weeks after the op, but could not stay for 6 months. We were part of a wonderful church family who stepped up and was going to help if we decided on the trial. My Mum was staying with us after I had the op, and we talked a lot. I decided it was a lot to rely on others to help us for 6 months. I rang the Oncologist and said I have decided to stay here. Within half an hour of me ringing him one of our support people rang to say she was in hospital with a broken hip. When I laughed she said, “It’s not funny but you have made your decision haven’t you?” I told her I had decided to stay here. She agreed it was the best thing.

For the next 7 months, I went to the hospital every week for chemo. Our son came with us once or twice. One day the nurse could not get the needle in right and our boy was with us this day, he told the nurse what she could do and offered to show her how it was done.

One of the trial drugs I could have had was given to a friend a year later as a normal course. Two friends came to me during the time I was having chemo and I convinced both to go to their doctors and both were discovered to have bowel cancer. One was under 60 and the other over 75.

The one thing that upset me is the blood test showed nothing was wrong. I had had low iron count before and been given iron tablets, but the low iron count was what caused the Specialist to question bowel cancer, plus my weight loss. As I said hindsight is a great thing and I believe now that I was showing symptoms from the beginning of the year. I had only had one show of blood in the bowel motions. Colonoscopies I would not wish on my worst enemy, the medication can be violent. Since that time I had to have a colonoscopy the year after my operation, then 3 years later, now it is every 5 years.

Interestingly since that time my aunt who died, her daughter has had it, Mums younger sister has had it, and Mum died of secondary lung cancer, primary undetected. As a family, we have been involved in some cancer research through Christchurch hospital and we do not have the gene for bowel cancer. All our family now have to have colonoscopies, my son is down to have one when he is 36.

The screening they are bringing in for bowel cancer is for 60 to 75 years olds yet my cousin and I were only 46, 47 when we were diagnosed. The screening is much easier than what we have been through, and blood tests do not always show up as cancer. My 2nd aunts’ cancer did not show up in blood tests. My cousin and my children have to be tested at 36, how much easier it would be for them to have the screening test, also for the rest of the family to have it.

I was very lucky to have a great church family and a great workplace who I believe have helped save my life. I went back to work after 4 weeks, I was to have 6 weeks off but I was doing a Teacher Aide course and wanted to finish with the rest of the class. I did 4 assignments in 4 weeks and passed the course. Work was amazing. One day I did not feel the best and decided just after morning tea I needed to go home. As I left the classroom the principal and office assistant were coming towards me with my handbag and car keys to take me home. It is so important to have that support and medical insurance as that is what has saved my life.

I heard one guy speaking on bowel cancer and he discovered his cancer too late as he was in a stressful job. Another person I met discovered it when they found out she had secondary cancer, how easy the bowel screening would have been on these people all who were under 60.

It will be 11 years in October after my bowel operation and I am pleased to say that I have had no more problems, although it is still in the back of my mind. I still have to have a Colonoscopy every 5 years. I asked about doing the bowel screening but even though I have had bowel cancer I am still under 60 so am not eligible for it.

That is my story. I hope it can help others and convince those who have the power to make the bowel screening available to all to allow them to have an earlier diagnosis. In particular, I want it available to those who have had any family member with bowel cancer to be tested whether it is an immediate family line or not.