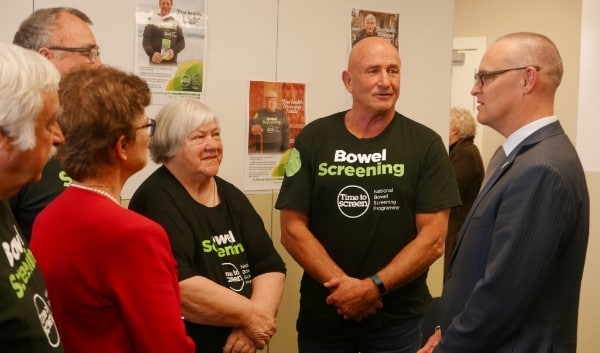 The NBSP is being progressively rolled out around the country and expected to be fully implemented nationwide by June 2021.  Clinical Director Dr Susan Parry says the introduction of a bowel cancer screening to New Zealand is hugely significant and will save lives from what is often a symptomless disease.

“People who are diagnosed with early stage bowel cancer, and who receive treatment early, have a 90% chance of long term survival. Screening also plays a role in preventing cancer by detecting and removing polyps, small growths in the bowel that may become cancerous over time.”

The NBSP is New Zealand’s first screening programme for both men and women. Once fully implemented it is expected to, detect between 500 and 700 cancers a year and reduce the toll of disease and death from one of our country’s biggest killers.

Minister Clark also recently met some of the people in Southland helping to spread the message about the value of bowel screening. The eight ‘community champions’ whose lives have been touched by bowel cancer, feature in a multi-media campaign. The videos can be viewed on the Southern DHB website.

For more information on the National Bowel Screening Programme visit www.timetoscreen.nz or call 0800 924 432.

Supplied by the Ministry of Health