Home > About Us > Ambassadors > Alex and Bailee Pledger 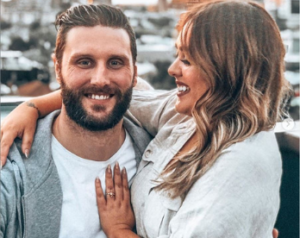 2021 was a turbulent year for this couple, with former Tall Black and Breakers basketball player Alex Pledger going through treatment for stage 2 bowel cancer.

Alex was unexpectedly diagnosed with rectal cancer the same day he and Bailee excitedly sent out their wedding invites. Although the fit 34-year-old was told the cancer, fortunately, hadn’t spread, Alex needed five weeks of intensive radiotherapy and chemotherapy at Dunedin Hospital. He finished three weeks before his wedding.

“I’d had symptoms for five or six months and went to a few doctors before I was actually diagnosed at hospital after I rushed in with heavy bleeding. The first 48 hours after the initial discovery was the worst two days of my life. They couldn’t tell me how long the cancer had been there or whether it was terminal or even operable. Then, when I found out it was contained to one area, it was like a tonne of bricks had fallen off me,” recalls Alex.

In July 2021, Alex returned to the basketball court just three months after being diagnosed with bowel cancer and six weeks after finishing his last chemo-radiotherapy treatment.

The couple’s support of our charity was everywhere, with all the Sharks players, the coach and officials proudly wearing our awareness ribbon for Alex.

“Six weeks ago, when I finished the treatment, if you saw the state I was in, it would probably be tough to believe that I would be able to contribute anything on the court this season. So I’m pretty pleased with myself that I’ve managed to get to a point where I can get back on the court again,” Alex said.