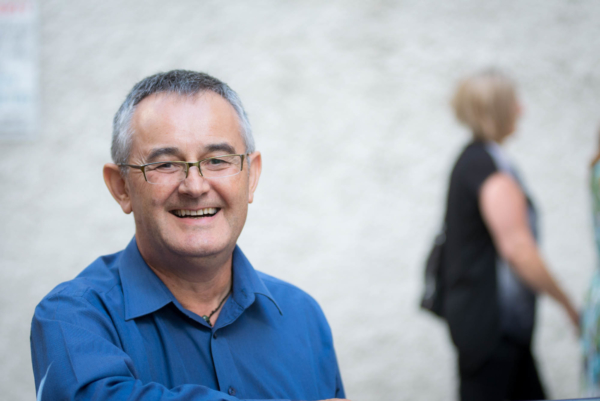 Having made it past 60 relatively unscathed I had no real concerns with my health other than I knew I had high cholesterol and that was managed with a daily pill which I had taken for the past 15+ years. I knew my father’s family had a history of heart disease but never really considered any other family traits. I never considered that I had lost an uncle to bowel cancer, another uncle to pancreatic cancer, an aunty to breast cancer and a cousin to prostate cancer. All on my father’s side (large family, my dad had nine siblings and I have forty cousins).

Late 2015 I noticed I was getting constipated and my daily trip to the toilet became 3 times or more each day. Also I was passing some blood, not much but enough to be noticed. As Christmas was fast approaching that was my focus and I pushed my personal situation to the back of my mind. After Christmas was over and all the family had departed I relaxed with my wife on a short trip to Gisborne during which I received a minor chest injury. Doctor prescribed ibuprofen and the result of that was a marked increase in blood being passed. After a few days I visited my doctor who did the usual tests (digital exam) and I described my symptoms. He prescribed a blood test and a colonoscopy. I had the colonoscopy scheduled for late March so until then I continued my life as normal.

The colonoscopy identified the presence of a tumour which at that point was described as being about an inch across. I was advised that this means bowel cancer requiring surgery. Having had lost a father-in-law a few years earlier very quickly after diagnosis of his bowel cancer I felt that this was my imminent death sentence.

But then the public health system quickly kicked in. The following day I was admitted for a CT scan and the following week I was admitted for an MRI. These identified the presence of a 26mm tumour and I was diagnosed T3a N2 MX meaning stage 3 cancer with two affected lymph nodes and metastasis which can’t be measured. Within a few short weeks I commenced a six week course of chemo via tablet and a five week course of radiation, all designed to shrink the tumour prior to surgery.

In late August 2016 I underwent surgery under the skilled hands of Dr Janet Ansell. After that she reported that the surgery was successful and even better was my original diagnosis of stage three actually turned out to be only stage one. This meant everything was contained within the bowel wall and was able to be surgically removed.

After recuperation from surgery I commenced a further round of chemo, this time via IV and while I expected some difficulties they were few and relatively minor apart from a couple of days which were particularly bad. In August 2017 I had further surgery to reverse the ileostomy bag I had carried since the original surgery and from there started my journey back to normality.

My transition from cancer sufferer to cancer survivor wasn’t just due to the skilled surgery from Dr Janet Ansell but also to the fabulous service from the Oncology team at Tauranga Hospital and Kathleen Kilgour Centre. Additionally I could never have made it through without the enduring support and encouragement of my darling wife Ali who has been an absolute brick through it all.

Through all of this I tried to avoid Dr Google and tried to live life as normally as possible and that helped me to deal with the hurdles encountered along the way. Now I would like to give back by helping Bowel Cancer NZ to spread the word to others, raise awareness of how prevalent bowel cancer is, try to alert others to the early symptoms and importantly make people aware of the great support and services available through Bowel Cancer NZ to those diagnosed and their families.