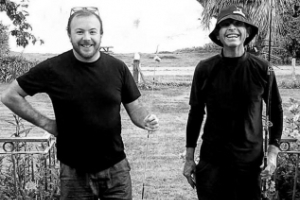 Cody and his Dad

My Dad, Chris Feely, was diagnosed with Bowel Cancer in January 2016 at the age of 55, after a colonoscopy because of unusual bowel symptoms. Surgery followed quickly to remove the tumour and as cancer was not detected in any of the lymph nodes, no further treatment was recommended.

Dad embarked on a change of diet and we undertook research into alternative therapies and embraced this change of lifestyle. However 8 months later in a routine follow up scan, the cancer had returned. Further testing discovered Dad had Lynch syndrome, making him more prone to certain cancers, bowel being one of them.

Lynch syndrome is hereditary and Dad’s brother also has bowel cancer and his father died of the same. The rest of the family are being assessed to see how many have this condition and to enable us to have preventative testing to catch any cancers early. My Dad then had three years of grueling chemo and radiation treatments, alongside chosen alternative treatments, but the cancer was unrelenting. We started looking into Keytruda as a treatment option at an estimated cost of $100,000, and then we were told of a new drug trial that had also had some exciting results. The drug was described to us as “basically the same as Keytruda, but made by a different company”.

In November 2018 due to his condition of Lynch Syndrome, Dad was offered a place in this world wide drug trial (American) that, like Keytruda, is immunotherapy based. The immunotherapy treatments are much less intrusive and debilitating than than traditional treatments like chemotherapy and radiation so we were keen to get started on this. He took up this opportunity and started the trial immediately in Christchurch, Dad being the 2nd person in NZ to be accepted on this treatment regime.

Unfortunately, Dad contracted a kidney infection which weakened him and in the December he was fighting to get this under control with frequent visits and stays in Timaru hospital. At the start of January, Dad went to Christchurch for an immunotherapy appointment, but was too unwell to resume the trial and he was admitted in to hospital. The infection accelerated his cancer and sadly Dad passed away on January 16th, 2019.

We lost our young, fit and healthy Husband and Dad to bowel cancer. He fought this horrible disease for three years and never complained once, even with the terrible side effects from chemo. Dad coped well with his illness, still managing to head round the golf course, hop on his road bike, and work full time while receiving chemo and radiation treatment and pursuing alternative therapies. My Mum, brother and sister all treasure the happy memories we made over the years, including a family trip to America two years ago where Mum and Dad surprised us kids and got married in Las Vegas by an Elvis after 25 years together.

Dads health deteriorated quickly – giving us just over a week to say our goodbyes. Here too, we have our cherished memories where we were together for his final week, all of us living in his tiny hospital room in Christchurch, away from our home in Timaru, as he was too unwell to travel back. We made the most of this time and reminisced about funny memories and family legends, while we spent our last few precious days together as a whole family.

My Dad won’t ever get to meet any grandchildren, walk my sister down the aisle, or retire and enjoy all that he and Mum have worked hard for. We will all miss his infamous drawn-out Dad joke on Christmas day, his terrible fashion sense, unforgiving challenges at BYC (back yard cricket) and the golf games which we will be unable to continue as family tradition. We have many indelible memories created throughout our lifetimes with Dad, but we would have loved many more.

Lynch syndrome affects an estimated 1 in 279 people in the general population. Based on New Zealand’s population of nearly 4.8 million, that’s over 17,000 Kiwis. This makes it more common than the BRCA gene mutation made famous by actress Angelina Jolie. Yet around 95% of those with Lynch syndrome don’t know they have it making it a severely undiagnosed condition. Lynch syndrome is not a “rare” condition, it is a “rarely known” condition.

Lynch syndrome itself is not associated with any symptoms so many people only find out they have it after they have been diagnosed with cancer. This often occurs when the cancer is at a late stage, which is why Lynch syndrome can be a “silent killer”. While most people develop cancer in their later years, people with Lynch syndrome can get cancer at a much younger age, for example in their 30’s or even 20’s.