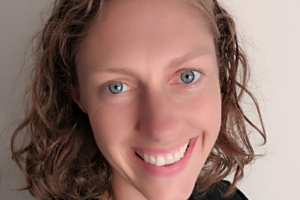 Dr Anne Mathieson is a 36-year old GP, and mum to two young children – and has been a bowel cancer patient. This means she can offer a unique perspective as a medical advisor.

Anne was diagnosed at just 34 years old and says it came as a real shock. She had symptoms of bleeding for a few days once or twice a year, for about six years. She was told she likely had haemorrhoids, which seemed like the obvious answer due to her age and no other apparent red flags.

Around a year after the birth of her second child, her symptoms became more persistent, so she requested a referral to a specialist, but had to wait a couple of months for her appointment. Following the examination, Anne says the specialist “became very serious” and she was sent for an urgent colonoscopy. Several polyps were found and removed, with the largest one having cancer. Due to the margins on the cancerous polyp being too small and the number of other polyps in the remainder of the bowel, her whole bowel was removed shortly afterwards. Following surgery, the histology demonstrated that there was microscopic disease in two of the removed lymph nodes meaning her cancer was upstaged to early Stage 3 and she proceeded to have three months of chemotherapy.

Anne had a ‘gut feeling’ that something wasn’t right, so she asked her husband to come to the specialist appointment. Being a GP made her more aware of her symptoms, and she says she became very impatient about waiting two months to see a specialist, but at that time, everything else seemed normal.

Physically, Anne is now feeling very well, but emotionally, she says it has been a very tough year. She now has regular tests and CT scans, as well as three-monthly blood tests, plus she’s taking part in a ground-breaking University of Otago study, in which they have sequenced the tumour DNA to then look for circulating tumour DNA in the blood. The goal of the study is to better personalise disease monitoring to detect any recurrence earlier in order to improve the prognosis if there is a recurrence.

Anne was inspired to become a medical advisor to Bowel Cancer NZ, not only because of her personal journey but to add another dimension to her work as a GP. She is part of a worldwide network of doctors who have had cancer, and she was offered some career counselling through them. “I realised I wanted to do something significant that makes a difference – and I feel I can offer a unique perspective, being both a medical practitioner and a patient,” she explains.

“The roll-out of New Zealand’s national screening programme is really promising, but it’s not enough,” says Anne, “There is a lack of funding around bowel cancer for doctors to access investigations when patients don’t fit the boxes required to be seen,” – something she’s hoping to address. “I know when I look at my symptoms, there were no red flags and I was only seen when I was due to my resources and knowledge,” she says.

“Diagnostic services need to be more accessible, particularly for younger people. A diagnosis of bowel cancer always comes as a shock, because our mindset is that it’s not meant to happen to young people – but the reality is, it’s getting more common.”

Anne believes that the support of complementary care during treatment and the emotional recovery after cancer is not well addressed in New Zealand. “More doctors need educating about providing holistic care during treatment, helping their patients recover emotionally and she feels Doctors need to push the importance of exercise, which has the most evidence for reducing the rate of recurrence following treatment.”

She also points out that the symptoms of IBS (Irritable Bowel Syndrome) and bowel cancer can be remarkably similar. “Many patients have IBS and self-diagnose or learn to manage it through diet and lifestyle. But if you have any symptoms which aren’t settling, just go and get checked, even if you think it’s ‘nothing’. Trust your instincts if you have a gut feeling: push back and ask for more tests. And if someone else tells you to get something checked, listen to them.”