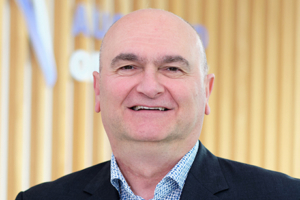 Dr Dragan Damianovich (MD, FRACP) is a medical oncologist and gastrointestinal cancer specialist who consults at both Auckland Hospital and Auckland Oncology. He’s deeply passionate about getting funding for bowel cancer treatments, which is why he’s joined Bowel Cancer NZ in an advocacy role.

“Bowel cancer has become a kind of ‘orphan’ cancer in the spectrum of New Zealand cancers,” he explains. “A lot of other cancer patients have access to very expensive ‘smart drugs’ including targeted agents and immunotherapy, but bowel cancer has been left out – with no prospects of approving any new drugs any time soon.”

Bowel cancer mortality is at the ‘top of the list’ of all cancers, says Dragan. “Yet in the last 20 years, no new drugs have been approved in New Zealand specifically for bowel cancer. In 2005, the first randomized study was published on Avastin, which has been a new standard in treatment of bowel cancer in the world since. So for last 10 years, I have been advocating very hard for bevacizumab (Avastin) and cetuximab (Erbitux) to be available to bowel cancer patients in New Zealand.”

“Bowel cancer is a journey. It’s not about having just one treatment: there are a lot of steps that can contribute to better quality of life and an extension of life. Yes, new drugs are not cheap, but the price of bevacizumab or cetuximab is peanuts compared to the cost of, for instance, immunotherapy that has already been approved for melanoma and is awaiting approval for lung cancer.”

Dragan says that to make a difference, New Zealand needs more passionate and high profile people advocating on behalf bowel cancer patients. “I work in both private and public, and I see the differences these drugs make in a patient’s life on a daily basis. In New Zealand, it’s a two-tiered system. The people who can afford to pay for a drug can live longer. This needs to change, urgently.”

Dragan sees a huge disparity between different types of cancer in New Zealand. “For instance, look at the number of expensive drugs that have been approved for breast cancer compared to other cancers, even though those drugs are much more expensive,” he says. “With breast cancer, there has been a great deal of lobbying – around Herceptin for example.”

He says that Pharmac are looking to fund more drugs for breast cancer in the future, including some very expensive drugs for third and fourth line treatment. “Yet we can’t even get approval for first-line bowel cancer drugs. Bowel cancer patients are really disadvantaged. The reality is the more drugs you have available, the higher the long-term survival rate.

The two lines of chemotherapy we have at the moment give patients a medium survival of around 20 months. With either bevacizumab or cetuximab given in combination with first line chemotherapy , they get about 30 months. If you add a second line treatment, you’re talking about 40 months plus. In the real world, medium survival could double or even triple if all these drugs are available for the treatment of metastatic bowel cancer patients.”

Dragan says that the patients diagnosed with Stage 4 bowel cancer truly highlight the disparity. “I echo the frustrations of my colleagues, because, in New Zealand diagnoses are often delayed. For the majority of bowel cancer patients that present late, we’re really disadvantaged compared to rest of world.”

Dragan points out that there is a lot of collaboration between Australia and New Zealand and that we could potentially replicate some of the things Australia is doing, but to date, we haven’t been able to do so. “Australia is top of the Western World, because of their well-organised research. They have significantly more patients in trials than New Zealand and they also have access to new drugs through the various access programmes, often two to five years before the drug is formally funded.

We’re not even near to that. We have a very rigid structure here that doesn’t allow new drugs to come through – and they may be more expensive to us because we’re not contributing to global clinical pharmacological research as much as other countries in the world.”

Australia is doing a lot of things right, he says. “Australian bowel cancer data shows that they have a better survival rate than anyone else in the Western World. New Zealand has one of the worst rates in the OECD. We’re really third world in terms of what’s happening with drugs and cancer care. No one can dispute those facts – it’s very sobering and very disappointing.”