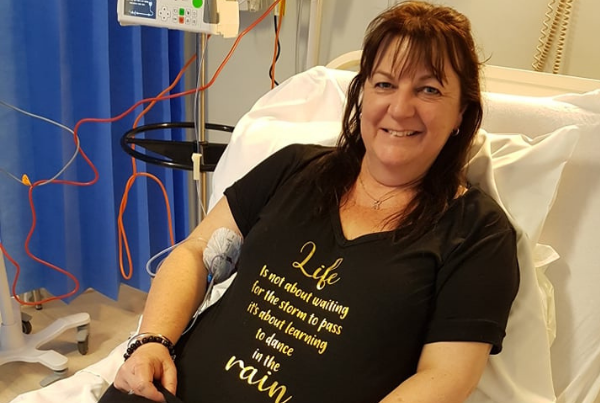 I was diagnosed on 29th December 2020 when I was 49.  I noticed changes and went to my doctor with my concerns about blood in my stools and after initially being looked over, I returned 2 months later and was referred to a specialist.  At that point my iron levels were severally low and I was referred for an urgent colonoscopy (top and tail).

After the colonoscopy I was taken to a separate room and advised that I had Colorectal Cancer.  Tears naturally flowed as the words flowed from the doctors mouth.  It was a tearful quiet trip back home and then a video call later that day to let my parents and daughters know my situation.

That set me on the path of a CT scan and an MRI scan.  I had 5 days of intense radiation in Palmerston North in March, one week at home then into Hawkes Bay Hospital for bowel surgery, returning home with an ileostomy bag.

Along with the tumour (4cm in size) removal, 24 nodes were removed and upon biopsy, cancer was found in 1 of the 24 nodes.  So from there it meant chemotherapy here in Hawkes Bay.  I was scheduled for 12 rounds of chemo fortnightly, however after several rounds the oncologist in Palmerston North discussed reducing the rounds to just 6 so I finished on 4th Sept.

I had the ileostomy bag removed on 2nd Nov.

I belong to the Bowel Cancer New Zealand Facebook support group and this has been a tower of strength and knowledge for me.  When I got the diagnosis I was naturally in shock.  I have done a whole lot of “mind” training over the years so after the initial cry and anger I switched into how do I make this journey my journey and not just something that I was being taken through, so I decided to do a few things.

One was having a meditation recorded where I picked very specific words to use to help me focus on the outcomes I wanted all the way. Secondly I had shirts printed for each of my chemo sessions so it gave me a bit of control in the process and provoked some great conversations at times.  Thirdly I watched comedy during my chemo sessions, once again distracting from the process and doing something that I know is good for the soul.

I also had my mantra for the hard days… “this too shall pass”.  Lastly, I let myself just do what my body needed.  Housework was no longer a priority, I accepted help and I asked for help and I shared my story. I can not thank my husband and my family and friends enough.

I have been very lucky as while I went through the usual side effects of radiation, surgery and chemo, I think I had it easy compared to others.  My family jumped in behind me and we raised over $500 for Bowel Cancer NZ during the Move Your Butt campaign.

I am now awaiting my CT scan in January to see if the cancer may have travelled elsewhere but fingers crossed it has not, and I can get on with making more memories with my new grandson born in July, and I have two daughters weddings to look forward to.