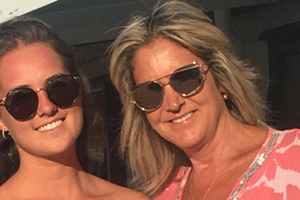 In February 2015 I was at the doctors with my daughter, on the way out, literally half way out the door, I mentioned that I had been suffering from quite (no in reality very severe – think take your breath away) lower abdominal cramps. I had assumed that they were all part of the wonderful menopause process. Not so said my doctor and thankfully requested that I have a scan as soon as possible as they could have been the result of an Ovarian Cyst.

On the 9th of February I had this scan and wondered why the technician was looking very worried and not speaking that much. Following this, I had a call from my doctor’s office asking me to come in that afternoon (this – as you can image seemed very abnormal and quite distressing). On arrival, he asked my three children to remain in the waiting room (also raising alarm bells), and then told me the devastating news that I had bowel and liver Cancer.

By 9.00a.m. Thursday of that same week, my wonderful doctor had organised and streamlined for me to have numerous blood tests including a colonoscopy, MRI and an appointment with an amazing oncologist. (this may not seem a lot to the uninitiated however to get bookings for these types of tests and specialists can take weeks if not months – wake up call to me – this is serious).

My oncologist, with all family present, then told me I had stage 4 bowel cancer that had metastasised to my liver and lung. I was told that my survival rate was 40% and I would need chemotherapy and three major operations. They estimated that my cancer had been present for 7 years, given how large the tumour in my bowel was and the five tumours in my liver. To give you an idea of how obtrusive this is, a paediatric colonoscope had to be used in lieu of an adult one.

Here I digress slightly. Yes, I had signs to warn me of what was happening, however I am one of those people that don’t like going to the doctor unless it is for my children and definitely don’t enjoy the thought of taking a ‘poo’ sample or having a camera put somewhere that it definitely should not normally go. Both fears are ridiculous, our wonderful health care professionals are used to ‘these’ samples and a colonoscopy is absolutely nothing to fear or be concerned about. NZ’s rate of bowel cancer is higher than that of prostate or breast cancer and therefore ensuring you have a colonoscopy once every three years can detect and prevent this insidious disease doing what it did to me – spreading to my liver and lung and hopefully nowhere else, but we don’t know that yet. SO PLEASE, if you have the slightest symptom – get it checked, it is not embarrassing, it does not hurt and it may keep you alive to watch your children grow up.

A second part of my digression is my wonderful surgeons and oncology treatment – it is expensive – please get health insurance as this made my horrible journey a little bit more comforting – these people are with you 24/7, they were my saviours and all three of them saved my life, more than once – so many stories, not enough time – but heroic stuff.

Unfortunately, I ended up having to have 6-months of sessions of chemo – HELL (will explain later) followed by two very major operations.

So, the reasons for the above, my oncologist recommended in my chemo treatment a new drug called Avastan – it was super powerful and its only downside was that it could cause blood clots and that it was not yet funded so was expensive, however my family who are my lifeline were right behind me in helping me to get this treatment. After my fourth chemo treatment I became very short of breath and my normal physical activity was simply out of the question. Fitness was my reason for living and the reason I lived. I could not even walk up a flight of stairs or up the sand dunes from my beloved beach. One afternoon, after a weekend of feeling very very unwell, I had to get out of the house and so went to the movies with my daughters and went to lunch prior to the movies, unfortunately we never made it to the movies, half way through lunch my daughters voices faded and my life blurred into a black nothing. I came back from this (although apparently I should not have), the two massive blood clots on my lung and right by my heart should have, nearly did, kill me. The reason according to my doctors that I survived was my fitness levels – PLEASE ALWAYS STAY FIT, no matter how hard, when you are going through chemo, even if it is a ten minute walk with frequent stops which I did often, it is the best thing as opposed to lying in bed.

I then went to another wonderful specialist, a haematologist, who prevented this from happening ever again. Because of these blood clots, I had to continue with the chemo rather than have the surgeries as planned, hence the 6 months of chemo. All of the people at my oncology department at 161 in Epsom could not believe that I could continue 6 months every fortnight without a break – I worked through this entire time and kept trying to exercise – which was probably the only reason I got through. I was stubborn and with the love and support from my family, I got through the 6 months.

So now the surgeries, bowel first.

The tumour in my bowel was so large that the colonoscopy camera could not get past it, nor could the child’s camera ugh!!! I had 20cm of my bowel and a lymph node removed, my surgeon was nothing short of a SAINT! Following the surgery, I thought I was all good to go after 3 days, not so, fourth day I got sicker and sicker – it was very very bad – my surgeon (who was sick himself) came in at 3.00 a.m. to put a nasal gastric tube in as none of the nurses could get it in due to a failed nasal operation in my youth, he got a scan on my surgical wound and they said it was fine. He questioned this result as I was so ill, if he had not I would have died as it was slowly leaking and would have caused peritonitis. Back into surgery. re-opened, restitched and given a colostomy bag – MY WORST NIGHTMARE – to let the bowel heal. This was only temporary. Intensive Care for 2 days and again saved by my fitness levels.

Liver surgery – another amazing world leading surgeon – so lucky. He had done a portal vein embolisation early on in my chemo (April) which basically shut down the blood supply to the larger part of my liver (we have a large blood vessel running through our liver and fortunately for me my tumours were all on one side of this vessel) so it basically died, leaving the smaller 30% part to think whoa, need to grow right now so by the time I had my surgery in November my 30% had grown enough to allow my surgeon to remove 70% of my original and diseased liver. Sounds simple right? It hurt like hell, as they literally have to angle out your rib cage to get to your liver and that recovery hurts argh!

But your liver is amazing – it completely regenerates – it is truly amazing. Mine is all brand new, pink and pretty (silver linings right?).

Oh, and at the same time as executing the liver surgery they removed the ‘HORRIBLE’ bag.

Well, that was it I thought, I had ongoing scans, blood test and colonoscopies and all was fine until Feb 2017 (two years later) and my CEA levels went up and everybody went into panic mode, including me. It was back – in my lungs.

By this time my wonderful oncologist had retired and the results I received from my new oncologist did not please me – stubborn – I rang my old oncologist and he explained, thankfully, that the tumours in my lung were there all along. Despite their presence, they were small and passive-growth tumours. Accordingly, they decided to treat the two major areas of concern – my bowel and liver – and treat the lung tumours at a later stage.

So, another operation – BUT NO CHEMO – and half a lung removed. By half I mean one lobe – your left lung comprises two lobes, your right has 3, and I had my top right lobe removed.

The ongoing treatment is that you have 3 monthly blood tests, 6 monthly scans and 2 yearly colonoscopies. At my last colonoscopy, which I have to stop my eternal Pradaxa (to stop blood clots) for, I was perhaps told to resume my Pradaxa a little early – my warning is – don’t! A week after my colonoscopy (at which had had a slight bit of bleeding but nothing serious so thought nothing of it) I went to work, had a meal with a glass of wine and then started to feel a little tired – I ended up passing out on the floor and haemorrhaging nearly 4 litres of blood and being rushed to hospital (thanks to my daughter hearing my cries for help) with sirens blaring and a Code 1 blasting over the mobile to the hospital.

I tried to remain positive throughout my journey and tried to stay as fit as possible, even though I was constantly reminded that I only had 40% chance of surviving, I thought those were pretty good odds.

Sometimes you just stop, sit and think … F..k I have been through a lot of shit but I am alive and hope to stay that way. For anybody out there, recently diagnosed or going through treatment – Kia Kaha – stay fit, stay positive and if you need to talk to anybody I am happy to talk to you so please do not hesitate to reach out.

I just want to make sure that anybody that has the symptoms – please get them checked, I didn’t, don’t make my mistake.