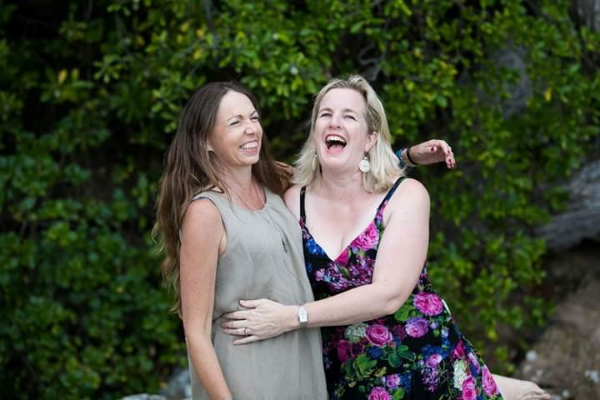 It is two years since I lost my best friend. I still can’t believe she’s gone. I see a pair of red boots, and I want to tell her about them. A new concert is announced, and I want to start planning our travel. It’s Diana Gabaldon’s new book, it’s my son loving the library, it’s going to Golden Bay… and many, many other things.

I look back on March 2020, and as well as the whole world coming to pieces with the spread of COVID and New Zealand’s first ‘real’ lockdown, my own world was coming apart.

I met Heather at university. She was a year older than me, almost to the day. Just like me, she liked music and dancing, English lit, and laughing. Lots and lots of laughing. Ever since, she was my person. We were with each other through the good and bad – the heartbreaks, the house moves, the new jobs, and new adventures.

After we shared a flat in Christchurch, we never lived in the same city again. That did not matter. She was one of those friends where you pick up the phone or sit down over a wine or a coffee, and it’s like picking up a conversation from five minutes ago.

I certainly don’t know it all. And as a support person for someone with cancer, it’s a completely individual journey. But here are a few things I learned.

This is a fabulous saying I got from a former boss. It means that if you think ‘is this possible?’, then just try.

One of our annual pilgrimages was to the Summer; Heather from Palmerston North, me from Tauranga. We were fairly sure 2020 would be our last (though I loved the fact Heather rebooked accommodation as soon as the show was done, as she always did). I wanted it to be one to really remember. So, I sent a letter to Greenstone Entertainment, asking if there was anything they could do to make it a bit more special this time.

Well, it took some doing, but boy, did they come through. They added us to the ‘Billy Idol meet and greet’ list. I waited until about an hour before it was happening to tell Heather, but then thought I should as the usual wine and sun combo was starting to hit us, and funnily enough you are not allowed to meet a rock god when intoxicated.

We had the best time. The rules were hilarious: ‘no autographs, no touching, no kissing, and no licking’… errrrr, okay! Best part was we felt like the young, invincible rock chicks we loved being, not like a set of best friends living their last glory days together.

We were in different cities, but this also works across town. At one stage messages and phone calls weren’t cutting it. It was around the time Heather was starting a new treatment regime, and while outwardly she was her usual optimistic self, somehow, I felt her falter.

With my husband’s blessing I booked a flight and a rental car. I did not tell her I was coming. But my memory of glimpsing her through the window when I pulled up outside her house, and realising it was me arriving from 395km away is still with me. I grabbed my overnight bag, and a bottle of wine in each hand, and knocked on the door. “I’m just passing,” said I with a smile. She just about knocked me over with her hug. So, if you feel like you want to go, and you can, just get there. Pay the piper, as they say, and pay the credit card later.

It’s okay to not be okay.

My best friend was more worried about me at times, especially with my history of anxiety, than I was about her. And even voiced her concern about taking me away from my family, particularly my two young children. Sometimes it’s hard to convince your ‘person’ that you are okay, or that you will be okay. “I’m stronger than you think”, I told her.

And if you don’t know what to say sometimes, that’s okay too. When things aren’t looking good, you don’t want to say ‘it’ll be okay’ or any other cliché. It won’t be okay. And it’s okay to be very not okay with the fact it won’t be okay, if that makes sense.

As our cancer journey went on, and it was obvious the results of tests were unlikely to be good, I would just message Heather, or send flowers, and simply say: #withyou – which means I am here with you, whatever comes.

Be extra kind to yourself.

Go with the mood. If you had elaborate plans and the mood takes you to the sofa binge watching The Big C, so be it. If you go out for a big night, and it ends up being a quiet one, that’s fine.

One day Heather told me she had emailed through her final wishes. It seemed too early, and I certainly wasn’t ready to read them, but she was clear on what she wanted, and wanted to get it sorted while she was clear frame of mind. I think it was that night I ended up crying outside our house, sobbing into a glass of wine.

Being mad is okay. Being sad is okay. It’s pretty much anything goes with this shitty thing called cancer. I did get mad. I wrote Heather a letter at one stage saying I was sorry, but I was really not okay with the situation that day. That it was awful, and she had been let down, and that I was not alright with her leaving this world, and me, behind. She understood. She agreed.

And I did get sad, very sad. After a night out, we went back to our hotel, laughing and drinking water to try and fend off the hangover which would surely come the next day. We were listening to Bruce Springsteen and Melissa Etheridge, and the rock stars who sung the kind of poetry we really related to. Be it the music or the alcohol or just the whole situation, I found myself in tears, floods of them, lying on the carpet and pounding my fist on the floor. It wasn’t fair and I wasn’t alright with it. It was Heather’s turn to hold me then.

But we also had some fantastic times those last weeks and months. We went to Tiritiri Matangi and savoured the native birdsong. We went out dancing ’til late in Auckland. We had that final Taupo concert, and some ridiculous hijinks along the way. That night it was me not wanting to go to bed. I figured out since that I didn’t want the night to be over. It was like we knew days were running short. Less than two months later, she was gone.

She helped me paint my kids’ playhouse. There’s a little message she left in there.

She always gave books at Christmas. We read those books now and the message she penned in the cover of the book means she is here with us, just a little.

It really helped me to send something to Heather every week – flowers, a picture by my children, a nail polish, a funny card, flower seeds, chocolate, a photo, or magnet. I think she enjoyed getting something in the mail as much as I enjoyed choosing those things. It felt like I was giving her a little smile from across the North Island. I would have done anything to see even half a smile.

We also texted back and forth every day. We started out with #3goodthings before she got really sick, and then moved to #3wingsup. Sometimes it was just a favourite TV programme or a glass of wine, or seeing a bird in the garden singing its heart out. I got a tattoo after Heather died to represent our friendship, and to remind me to always try to be #wingsup.

Also, I asked a friend to take some photos of us in one of our favourite places, on the beach. It was fun, and the last pictures of us together. I treasure them, and how happy we were that day.

I started running when she was ill. It helped me greatly to be able to pound out my feelings with a four- or five-kilometre run. She was a runner too. I did it for her when she was unable to, too.

So, I carry on without my person. I just have to. The experience has changed me. I try to really live, and to count my blessings. And to still wear my red boots. For her, for me, for us. Red boot rockers forever.