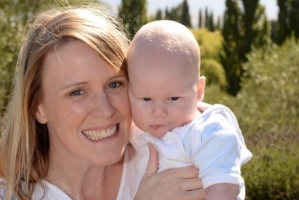 Katherine (Kat) was one of the many Kiwis considered ‘too young’ to have bowel cancer – she was diagnosed at age 34. “My only initial symptom was fatigue. I had two kids at the time, so I saw my GP, who said my iron levels were really low and prescribed iron tablets.”

Kat had an operation the next day in Auckland to remove a large tumour in her bowel. Two weeks later, she flew back to Dunedin, where her oncologist told her she had incurable cancer. I thought ‘I’ve got 3 kids, I can’t have bowel cancer’. “It was Stage 4 cancer, she says. “I asked if I was terminal and he said, ‘no, you’re not in the process of dying – you’re in the process of living’.

She started on a combination of chemotherapy drugs, including an unfunded drug that cost $25K for 12 rounds. “After the first 12 rounds, it’s free, so I took it for four years,” she says. “I lost track of how many treatments, but they worked and my tumours kept shrinking.” In fact, Kat’s been in remission for almost a year. “It’s my five-year ‘cancer-versary’ on 15th February – for someone who’s had Stage 4 cancer, that’s amazing.”

Mary recommended Kat join Bowel Cancer NZ’s support group for patients and their families through Facebook. “It really helped me to get feedback, support and advice from others who’d been there and done that. Mary also referred me to a counselling service through their Service Directory for my eldest son, who has anxiety and doesn’t like to be away from me.

“Most of all, you learn you’re not the only one going through this,” she says. “At times, you can feel very alone and very isolated, but Bowel Cancer NZ really reaches out to help you.”