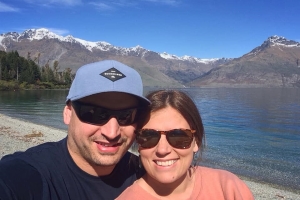 I noticed I was more tired than usual but chalked that up to having young kids and travelling so much through work. What bothered me most was the persistent pain in my abdomen. I had experienced it for a while, but it was getting worse and beginning to keep me awake at night. It was starting to affect my appetite and I was skipping meals regularly. At first, the weight loss was barely noticeable but then it became more drastic. I probably lost 10 kgs in 2 months without doing any exercise. In hindsight, this should have been more of a red flag than it was at the time.

I decided to go to the G.P as I couldn’t shake the feeling that something wasn’t right. My wife was shocked by this, as it’s not something I do often. She insisted on googling my symptoms. The first thing that came up was Irritable Bowel Syndrome and then Crohn’s Disease. Both of these seemed to fit my symptoms.

My G.P. did not muck around. She ordered a blood sample, a stool sample and an ultrasound. Rather than simply referring me for the ultrasound, she called to find out how long the waiting was during my appointment. I listened as she told them that 2 weeks was too long and insisted it be sooner. I had an ultrasound that afternoon. This showed I had inflammation or a possible obstruction in my large intestine. The following day, my G.P. advised me it could be Crohn’s disease, and I was referred to Wellington Hospital for an urgent colonoscopy.

Two weeks after visiting my G.P. I went in for the procedure. My wife and I were put in a separate room to wait for the results. The Gastroenterologist came in and she looked visibly uncomfortable “You were referred by your G.P. to look for Crohn’s disease or something worse. Unfortunately, it’s something worse”. My wife asked, “What’s something worse?”. I knew what was worse, I had seen it on the screen. She replied “I’m sorry. It’s Bowel Cancer”. I tuned out at this point while my wife and the doctor discussed the details.

Two days after my colonoscopy I had a CT scan. I knew this was crucial in determining my staging. Waiting for the results of the scan was probably the hardest part of the journey. The CT showed that while there was inflammation in the lymph nodes next to the bowel, there were no signs of cancer in any of the other major organs. This was consistent with Stage 3 and my tumour was large – 10 cm – but treatable. The path forward was clear – surgery followed by chemotherapy.

While the results of my CT scan weren’t received in time for that week’s multi-disciplinary meeting (where surgeries and care are scheduled for cancer patients), my Gastroenterologist took it upon herself to chase up the results. She then consulted the surgeon and booked in surgery, rather than waiting for the next meeting. This becomes important later.

A little over a week later, I was in the operating theatre to have a large section of my bowel removed. I was happy to see it go. In the post-surgery follow up, I found out that there was no sign of cancer in my lymph nodes, which moved my diagnosis down to Stage 2. My surgeon also told me I was lucky as due to the location of the tumour the blood supply to my appendix was being cut off, leading to appendicitis. Meaning, if there had been any delays in my surgery cancer would have been the least of my worries.

I went on to have 6 months of chemotherapy. This was hard, not just on me, but my family as well. However, I wanted to be sure I was doing everything I could to prevent it ever coming back.

Genetic testing revealed I have a condition similar to Lynch Syndrome. I will be screened regularly for the rest of my life. My children are also now in the system, which means when they are old enough, they too will be screened.

Don’t sit on your symptoms. I could have gone to the G.P. earlier than I did, but everything is clearer in hindsight. I am so grateful to my G.P., Dr Kerry Thornbury, and the team of medical professionals at Wellington Hospital. The Gastroenterologist, Dr. Estella Johns, my Surgeon, Dr. Ali Shekouh, and the entire Oncology team (especially the nurses). Without their commitment and dedication, I probably wouldn’t be here today. To put it into perspective, a month after visiting my G.P. with abdominal pain, I was being discharged from hospital post-surgery.