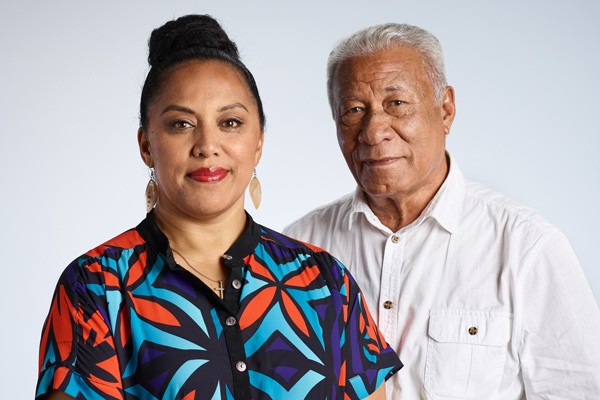 Patrick Loloma Afeaki, was diagnosed early, after his family encouraged him to have a colonoscopy. It was August 2018 and he was 66. Surgery removed Patrick’s cancer and he had three to four months of chemotherapy as a precaution.

Six years ago his daughter Rachel Afeaki-Taumoepeau didn’t know anything about bowel cancer.

Then it struck her family twice: her mother’s was terminal by the time it was diagnosed, but her father’s cancer was caught early. “We just can’t understand how we missed mum’s cancer,” said Rachel.

Edith-Mary Afeaki was a Tongan-born, trilingual community educator who worked for a South Auckland primary health organisation (PHO). She was diagnosed in January 2013, at 63, and died about six months later.

Edith-Mary didn’t drink or smoke, was otherwise healthy, and was surrounded by health professionals at work, her daughter Rachel said. “We have no history of bowel cancer that we’re aware of,” she said.

“If I look back now, my mother was experiencing tummy pains, loss of appetite, she was losing weight. … We thought … at that age, they do tend to lose a bit of weight, their appetite changes.” Her mum probably didn’t know the signs or what to ask, Rachel said.

Edith-Mary went to the doctor but blood tests showed nothing unusual – until she deteriorated and went to ED. “Within 48 hours, they had determined that she had stage four bowel cancer and she was considered terminal.”

A 2018 study in the PIPER Project found a “significantly worse” risk of death for Pacific patients with bowel cancer, and that Māori were also at increased risk. In many cases, people were being diagnosed at an Emergency Department, once the cancer had progressed, the study said.

When her Dad was diagnosed last year Rachel understood a lot more, was more assertive with her questions, and had a positive outlook.

Many elders in the Pasifika community don’t know what to ask, Rachel said, or won’t challenge a doctor. “I think too often, as Pasifika and Māori people, we don’t talk about taboo stuff such as bowel cancer, because bowel cancer is concerned specifically with certain parts of the body that nobody wants to talk about. But we’ve got to.”

Pacific and Māori communities need to hear from members who have recovered, or are currently being treated, Rachel said.

*Story from The Waikato Times