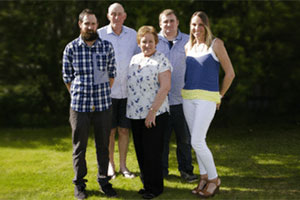 My name is Peter Death – I was born and bred in Taranaki. I am now 62 and 2 years ago faced redundancy after 22 years in my role. That same year my mother (who was 94) died. I have recently been diagnosed with a Mitochondrial Myopathy (CPEO) and the only symptom before my bowel cancer was discovered was tiredness, which I put down to Mitochondrial issues.

In November last year I received a renewal notice for term life cover and premiums were increasing and as we had recently cleared all our debt decided I should be cancelling it but thought I’d have check up with my GP.  I told I him couldn’t remember being checked for bowel cancer so he arranged for the normal tests they do and supplied 3 days of samples.

Following detection of blood in my faeces I was referred to a specialist (who was on holiday) so I saw him at the end of February and as I had private medical cover a colonoscopy was scheduled for 30 March. He told me the amount of blood was miniscule and chances were it was probably nothing to be concerned about.

I had the colonoscopy and as soon as I woke after it the doctor broke to me the news that I had bowel cancer and I was to see him at his surgery the next day. A CT scan was scheduled for 10 April and at my appointment the next day the specialist said there was nothing else showing and surgery was scheduled for 9 May.

I had HALs anterior resection at Taranaki Base Hospital as due to my mitochondrial issues I needed to go into HDU after surgery. Private Hospital was not an option.

All went according to plan and on the 1st June I had an outpatient’s appointment to go over test results and discuss if any further action is required. To my astonishment he confirmed all the tests were good and no further treatment was required. He will see me in 12 months time and look at doing a further colonoscopy. In the meantime four monthly blood tests are to be arranged through my GP.  I just feel so lucky.

There is no real history in the family although I did have an uncle on my father’s side that did have bowel cancer.

During my hospital stay I thought I needed to do something to make people aware of how easy it was to be checked and for the first time in years have a real focus in my life.

As member of our local Lions Club I would like spread the word by talking to clubs and organisations to share my story.

As you can see this has ignited a passion in me and I want to do all that I can to help others, and also to get the message out there not be afraid to see your doctor if you have any symptoms that are worrying you.