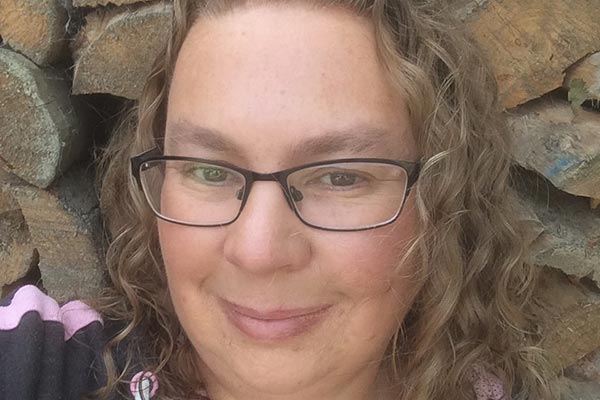 In April 2016 I underwent surgery to remove a tumour from my bowel. I was 38 years old and had no symptoms, other than an episode of pain in my lower left abdominal/pelvic area. Bowel cancer was something that was not on my radar.

After a visit to my GP, in February 2016, I was sent to A&E for further testing as my GP knew something was not quite right but couldn’t put her finger on it. The day before I was unable to walk, sitting was painful, just doing the basics of living was painful. The pain was located in my lower left pelvic/abdominal area. Nothing specific, just pain. I was kept in hospital overnight, on the assumption i would have an ultrasound the following day. This did not happen and I was discharged with a virus.

I knew deep down something was not right. My GP had mentioned to me she thought I had an ovarian cyst, which I thought was nothing major and could be handled easily. So, with those comments still fresh in my mind, I visited my GP again, the day after hospital release, and requested an ultrasound through my private healthcare insurance.

Two weeks later I was lying on a table in the radiographers office, watching the ultrasound on the small screen. I’ve seen one before when I was pregnant so it was nothing new. Until then I was still under the impression nothing major was wrong, until after the ultrasound. Here they couldn’t distinguish between my ovary and my bowel on the left side. It was recommended by the Radiographer that I have a CT Scan.

Two weeks later I was lying on a different table in the radiographers office, undertaking my first CT scan. Here it was discovered I had a large tumour in my bowel, that was just about to block it and if nothing was done soon I would end up an emergency case.

One week later I was on the operating table about to undergo my first colonoscopy. No 38 year old should have to go through this, but it literally saved my life. The tumour was close to blocking the entire bowel. So much so the surgeon could not fit the camera through my whole bowel, and only made it as far as about 30cm inside. I was then booked for surgery.

In April 2016, I had my first surgery, a laparoscopic procedure, to remove the sigmoid colon. I had 30cm of bowel removed and sewn back up. Everything was successful and I recovered from this surgery well with no adverse reactions. The wounds healed nicely. My tumor was stage at a 3 as I had lymph node involvement. At this stage my surgeon was happy that everything was removed.

Four weeks after surgery I met with my oncologist who recommended the standard treatment of CAPOX, six months of chemotherapy. At first I resisted, and had a few reactions to the medications, but after a couple of rounds and some adjustments to dosage I stabilised and continued to finish all 8 rounds, the last four with Capecitabine only.

It was a tough six months, for both myself and my family. But at the end, we were happy to put the last year behind us and move on with living life. I didn’t give any opportunity away. I was living life to the fullest.

In April 2017 all that I had worked for, the fun life, the relaxed life, the stress free life came crashing down again. After my 1 year anniversary CT scan to check all was ok it was discovered I was not ok. The chemo hadn’t worked as it should and my original tumour had, unbeknown to anyone, perforated the bowel wall and sealed itself back up. There were cells on the outside of the bowel, and in some lymph nodes, that resisted chemo and continued growing. Devastated.

Now, it is October 2017 and I am 10 weeks post-surgery, for the second time. This time my surgeon performed a full open surgery and cleaned out everything he could see. I am feeling fantastic. I sit a little lop-sided as there is no tissue or fat on the left, but I am so thankful to my surgeon for taking extra care and doing what needed to be done. I can now get on with living a fun, stress-free, relaxed life again, enjoying it with my family for many more years.

There is no guarantee that cells will not grow again in my body but I am now giving it every chance I can to work in the best possible state and not give cancer the chance to grow. Now, as part of my future work, I want to educate people on the signs and symptoms of bowel cancer, but not only that. You need to know and understand your body. You need to know your normal. You need to follow that gut feeling if something isn’t right. Ask questions. Keep asking questions until you get the answers you need.

I did not have any symptoms of bowel cancer, except one or two days of pain, which we now know probably relates to the tumour perforating the bowel wall. I was young. I was healthy. There was no blood in my stool. I had an elevated CEA blood level but nothing to be alarmed about. I have no family history of bowel cancer. I eat well. I exercise. Bowel cancer does not discriminate. It can and will strike anyone at anytime.

Although my future is bright, it is still not glaring, sunshine, I need my sunnies bright. Next year I am hoping to start study towards some qualifications around nutrition, health and acquire a much bigger understanding of bowel cancer and how I can help others, both with how to handle a diagnosis, health and nutrition through treatment, and help those that just want to improve their own lifestyle. I am also currently training for a half marathon in May.

Having bowel cancer has given me a far different view on life and how I approach it day to day. It has given me a second life that I would never have experienced.