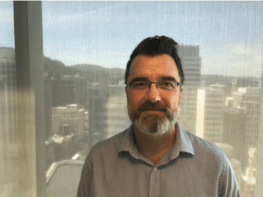 I was 46 when I was diagnosed with stage 3 bowel cancer. I wasn’t in any pain. In fact, the only symptoms I had was sporadic blood showing up in my poop and some constipation and cramps. Nothing really – or so I thought.

I’d been doing a bit of international travel with work and so the first doctor I saw thought I might have picked up a bug. I had a stool test but it came up inconclusive. About two months later a second GP thought I might have a cut in the lining of my rectum and sent me home with some cream. Finally, a month later my local GP recommended me for a colonoscopy (to get to the bottom of things…). I would have had to wait a few months in the public system so I decided to get mine done privately ($2500 – ouch).

But that ended up being the best decision I ever made – as they soon found a very large tumour that was nearly blocking my bowel. I then had a series of tests and scans – it was a scary time for me and my family as we waited to see if the cancer had spread elsewhere in my body. Around a month later I was on the operating table to remove the tumour. I had only just acted in time – the tumour had nearly grown through my bowel wall.

After I recovered from the surgery I had eight rounds of chemotherapy. I handled that alright and tried to be at work as much as possible – hanging around the house just did my head in. I found having an ileostomy (a temporary colostomy bag on my stomach which I did my ‘business’ in) was pretty horrible – it limited what I could do and made me very self-conscious. But it was necessary to give my lower bowel a chance to heal.

After chemo, I had an operation to remove the colostomy bag and re-join my bowel. Unfortunately, the join failed and the contents of my bowel leaked into my abdomen for around 5 days before the doctors picked it up. That had set up an extensive general infection in my abdomen that required further emergency surgery. Luckily after a second go they successfully joined me up and I was free of the dreaded colostomy bag.

I’m very happy to have my body back and to be doing normal things like walking the dogs, playing golf and just generally getting on with my life.