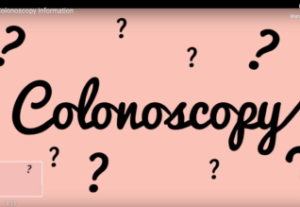 In 2018, Merrilee Williams, a Clinical Nurse Specialist at Mercy Hospital in Dunedin, co-design an animated video with a talented group of students at Otago Polytechnic, supported by their lecturer Jon Wilson.

This colonoscopy information video was developed to be used as a resource for patients who would be having a colonoscopy, to give them a comprehensive overview of what to expect before, during and after their colonoscopy. It also includes an explanation of the known risks of colonoscopy in line with the “Endoscopy Standards for Individual Colonoscopists Performing Bowel Cancer Screening in New Zealand (2017)”.
The video can be used as a resource for patients who may find greater understanding from a verbal/visual explanation of the procedure details. The design of the script ensured that the terminology used was familiar to the general public inline with current health literacy guidelines. The ultimate aim of the video is to provide all the required information to the patient in an understandable format, so they can then feel confident to give genuine informed consent for colonoscopy.
Merrilee used the video as the basis for her dissertation to complete her Master of Health Sciences- Clinical Nursing, in 2019 where it was shown on a tablet with headphones to 100 patients undergoing colonoscopy, to give feedback on via survey monkey. 99% of patients surveyed felt positive about receiving health information in a media format, they also found the animated design to be visually appealing.
Overall, patients reported that they found the information easy to understand, gave them a greater understanding of what would happen before, during and after their colonoscopy, would reduce anxiety about their colonoscopy, and that they would recommend it to others to use as an informative resource.
Bowel Cancer NZ was so impressed by the video, that we have included it in our information about colonoscopies on our website.
Share
Tweet
Share
Reddit
Share