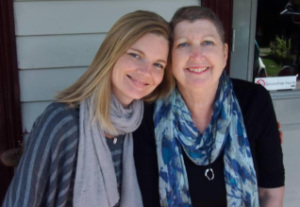 Bowel cancer survivor and registered nurse, Kirsty Wing, is representing the patient / public perspective on the Bowel Screening Advisory Group (BSAG) for the National Bowel Screening Programme. As a keen supporter of our charity, Kirsty wants to make sure she represents her fellow patients and the objectives of Bowel Cancer NZ.

Photo (L-R): Kirsty and Barbara while they were both undergoing bowel cancer treatment.

Kirsty’s inspiration for working with the BSAG is her late Aunty, Barbara Peat. When Barbara’s first symptoms of bowel cancer became obvious, she already had stage 4 disease. Bowel screening may have made the difference between life and death.

When Kirsty was diagnosed with bowel cancer in 2014, at just 33 years of age, her Aunty Barbara had already been on the treatment treadmill for more than 3 years. “I would not like anyone to go through it, but I was so fortunate to have my Aunty Barbara as my supporter, teacher and guide. She was able to relate to many of my experiences, shared lots of invaluable gems and didn’t mince words. She rolled with the punches and kept smiling and constantly laughing whether she was talking about her internal or external pains.

“She was also a great advocate for speaking about your symptoms and signed off her regular email updates with a cheery, ‘Don’t forget to get your bum, boobs and bits checked!!!”

When Kirsty noticed a change in bowel habits and felt unusually tired, her Aunty’s words rang loudly in her ears. Despite having symptoms, a family history of bowel cancer, experience as a health professional, and a growing sense of unease, she still found it difficult to access the system, (it took 3 different doctors and 8 weeks) so she can relate to the challenges and frustrations many New Zealanders face. “I remember thinking, “I’m trying Aunty Barb, I’m trying!”

While a country-wide rollout of the National Bowel Screening Programme is underway, other work is going on behind the scenes to address inequalities, and Bowel Cancer NZ has been instrumental in communicating the needs of our bowel cancer community.

Kirsty shared these lovely words with us, “I wanted to thank you for producing the wonderful 2020 Manifesto & Call to Action 2025. I can appreciate a huge amount of work must have gone into producing such clear, articulate documents. You made my job of representing the consumer perspective much easier and I love seeing support for Bowel Cancer NZ grow, but I realise it doesn’t happen without a lot of hard work.

“My vision is of an inclusive, equatable National Screening Programme that will save more lives.”