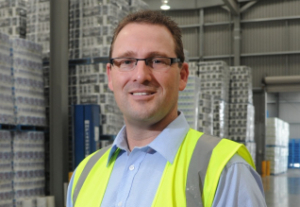 “The biggest issue is raising awareness of bowel cancer symptoms. The Move your Butt challenge will help get the message out there, so we’re very keen to get involved.”

Kim Calvert is Country Manager at Cottonsoft New Zealand, and he and his team are definitely getting behind the Move your Butt challenge in June. Cottonsoft has not only been a major sponsor of Bowel Cancer New Zealand since its inception in 2010; the whole team have also been involved in a number of past fundraisers.

For Kim Calvert, supporting Bowel Cancer New Zealand is not just professional – it’s also personal. Kim’s father died of bowel cancer after a ten-year battle. “My father had seen the GP several times, but it wasn’t picked up until he changed doctors. Once it was finally diagnosed, it was too late. He fought it for close to ten years and had several surgeries.”

Kim says that unfortunately, bowel cancer tends to run in the family. His mother was also diagnosed with bowel cancer a few years later, but recovered, and Kim and his sister both have regular checks for polyps (which can be pre-cancerous). “My parents are of the generation that never talked about bowel cancer. There isn’t enough awareness of the symptoms, yet it’s a significant disease that kills more New Zealanders than either breast or prostate cancer. The Move your Butt challenge isn’t just about exercising more – though that’s important – it’s also about spreading the word so that more people are aware of the early symptoms and see a doctor sooner.”

Kim says that that Cottonsoft has tried to go above and beyond to raise awareness of bowel cancer in the past few years. “The CottonSofts brand has engaged a number of different on-pack campaigns aligned with Bowel Cancer New Zealand, and we  share our sponsorship messages with our customers during meetings and in the wider public arena. We also helped out with PR in the early years, and our team always get on board with fundraising initiatives like Move your Butt.”

The team are working on how they’re going to Move their Butts, but as the company is currently in the process of moving into new offices, we’ll outfit our new exercise area to make it easier to do. They’re calling their team ‘Cottonsofts Kicks Butt’ and, whatever goals they come up with, we’re sure they will!