CottonSofts has a passion for the cause

CottonSofts has a passion for the cause 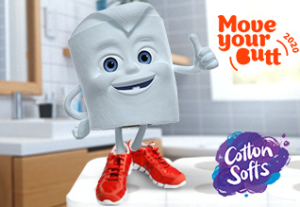 In May 2013, CottonSofts became a proud sponsor and supporter of Bowel Cancer New Zealand. Since then, CottonSofts have worked with us every year, creating campaigns to help raise awareness and much-needed funds. Additionally, their staff participate in campaigns that we run and will organise bake sales and create other activities to provide extra fundraising for us.

As changes in bowel habits are one of the more common symptoms of bowel cancer, there is an obvious link between toilet paper and bowel cancer but on top of that CottonSofts commitment to the campaign comes from a passion for the cause.

Many at CottonSofts have a loved one or know of someone that has been affected by bowel cancer. Their country manager, in particular, has a personal connection losing his father to bowel cancer following a 10-year fight. Having witnessed the impact of bowel cancer on his family, and knowing the vital difference early detection makes, it’s heartbreaking to think that so many Kiwis lose loved ones to what is a highly curable disease if caught early. So CottonSofts are especially proud to be heavily involved in the promotion of the Move your Butt campaign again.