Ed’s Move your Butt challenge: Losing my Dad was a wake-up call 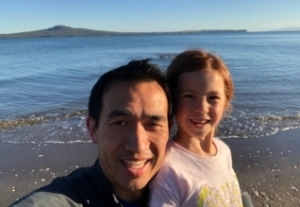 “My Dad was such an amazing role model. As a father, staying healthy is a huge priority for me and regular screening for bowel cancer is a no-brainer.”

Edwin Lim has several very moving reasons to get involved in this year’s Move your Butt challenge. Bowel cancer has affected too many friends, family members and colleagues.

In fact, Ed’s law firm, Hudson Gavin Martin, has been a supporter of Bowel Cancer NZ since its inception in 2010. “My wife Annika is a good friend of Mary Bradley (Bowel Cancer NZ’s Communications and Funding Manager). We were both working in the Middle East when Mary was diagnosed with bowel cancer at age 28 – with a five-month-old baby. Seeing Mary deal with the shock of the diagnosis and what she went through really opened our eyes to the tragedy that is bowel cancer in New Zealand.”

Closer to home, Ed’s father was also diagnosed with the disease in 2009. At the time, Ed and his wife Annika were still working in the Middle East. “Dad was a retired endocrinology medical researcher at the University of Auckland medical school. When we were overseas he developed an autoimmune disorder. He got through that, but he didn’t come right and suspected it could be something else.” Ed says he had many of the symptoms of bowel cancer but it was misdiagnosed. “He’d go to the doctor who kept saying it was nothing to worry about.”

Ed’s sister, a doctor in Melbourne, visited her father just before Christmas. She was shocked at how unwell he looked and insisted that he see a specialist. Finally, scans revealed a Stage 4 ‘tennis-ball-sized’ tumour in his small bowel, which turned out to be a very rare form of bowel cancer.

The tumour was removed and Ed and Annika came home to New Zealand in 2010, after his father was diagnosed as terminal. They spent a year with his Dad and were honoured to have him attend their wedding shortly before he passed away.

More recently, just before Christmas 2019, one of Ed’s colleagues was also diagnosed with terminal bowel cancer, which has further cemented his dedication to spreading the word about New Zealand’s second biggest cancer killer.

“Many other people at our firm have had family members affected by bowel cancer too. That’s why we’re all behind it – both as a firm and me personally.” For his Move your Butt challenge, Ed says he’s thinking about either doing 20 minutes a day of intense exercise, or taking the 16 flights of stairs to his work every day.

“I have a young family now, so I do everything I can to stay healthy and prevent bowel cancer.” Ed is very open about the fact that he and his sisters now have regular colonoscopies. “It’s nothing to be embarrassed about and not a big deal. My Dad was such an amazing role model. I have a young family and staying healthy is a huge priority for me and regular screening for bowel cancer is a no-brainer.  I’ve spent the last year focusing on my health with a change of diet and lifestyle. Losing my Dad was a wake-up call – life is too short not to put your health first. You might look after your car and your house, but we often forget that the most important asset is you.

“It’s vital to understand what the symptoms are and if there’s any doubt, don’t sit on your symptoms, see a doctor,” stresses Ed. “And if you’re told you’re too young or it’s not bowel cancer, follow your instinct and get another opinion.

“My Dad thought his doctor was the right person: he was seeking an answer and got the wrong advice. Doctors are extremely knowledgeable but we can’t expect them to know everything – sometimes you just need to insist on seeing a specialist if things aren’t right.”

“Losing my Dad was a wake-up call – life is too short not to put your health first.”

Join Ed and move your butt to help beat bowel cancer, by signing up today.