Emma’s Move your Butt challenge: Just imagine the pain of losing a loved one Emma Purchase’s gorgeous husband Chris, the father to her two children (Stevie 3.5 years old and Tom 19 months), tragically passed away at the end of February from stage 4 bowel cancer.

His death has inspired Emma to take part in and come onboard as a community ambassador for Move your Butt. Below she asks you to imagine, just for a minute, what’s its like to lose a loved one to bowel cancer.

It’s not that you can’t imagine… you don’t want to… who would? It’s too painful.

But just for a second, imagine…

In April 2018, Chris had been having some symptoms that we both concluded were probably haemorrhoids. Pain, a little bit of blood. He saw a white cross doctor first who gave him some cream and said to go back to his GP (Chris didn’t have one at the time, because he never got sick) in two weeks if things didn’t get better.

Things got worse but Chris waited for those two weeks… he then went to see a GP at the practice I go to and from there was booked in to see a specialist. As the doctor said, anything in that area should be seen to quickly. So off we went for his specialist appointment a week later thinking the (now internal) haemorrhoids would be sorted out. I watched while the specialist examined Chris, which for him was excruciatingly painful. There was a lot of blood. 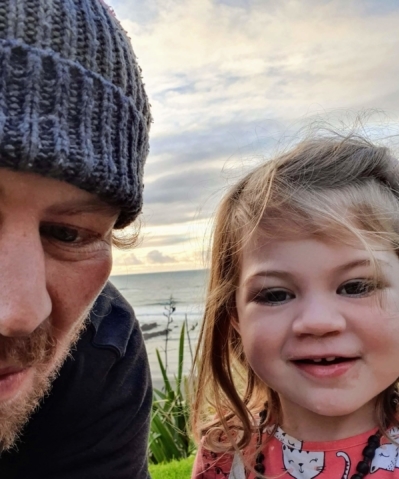 From that small examination, Chris was told that he had cancer.

I was 16 weeks pregnant.

Stevie was only 18 months old.

The next part feels endless, relentless… imagine constant hospital visits, appointments, knock backs, bad news, new plans, more hospital visits, trying to pick yourself up, stay hopeful, to then have more bad news, more procedures, operations, more treatment, trying to raise money for an unfunded drug… all the while trying to live some form of a normal life for your partner/your children… for yourself.

And then for the unlucky ones, after all that trying to live, putting up with all the poking and prodding, tubes coming out of everywhere, doing everything they can to just have some more time, just like that, they’re gone.

No more kisses goodnight, no more I love you, no more texts, no more silly banter, no more birthday celebrations, no more wedding anniversaries, no more unconditional love.

Desperately clinging to the smell of their jumper, trying to remember the sound of their voice, wishing they’d walk through the door, crying yourself to sleep because of how much you miss them, feeling guilty for things left unsaid, wishing you could have done more to keep them alive…

Chris went through so much and just under two 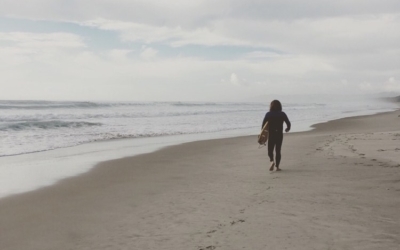 years, his big strong body became just skin and bones… he put up with it all because he was so determined to live, he didn’t want to die, he had so many things he still wanted to do. He wanted to see his children grown-up, go for another surf, take us all on holiday.

He was so hopeful, so stubborn, far too young.

I know Chris wouldn’t have wanted me to dwell on him being gone though, I know he wants us to live life even harder than we did before. There is still joy, I still feel happiness, I still laugh, I still love and that is why I’m moving my butt for him, to raise awareness about bowel cancer.

For so many, all you need is your imagination, you will never have to actually endure the pain we went through, the pain I am going through, what others are about to encounter.

Join Emma and Move your Butt to help beat bowel cancer by signing up today or donate to her fundraising page.