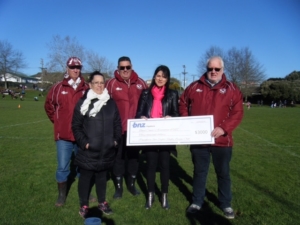 A big shout out to the Papakura Sea Eagles Rugby League Club for their generous donation of $3,000 to Bowel Cancer New Zealand!

Sarah Lambourne, our Ambassador went along on Saturday to watch the inaugural Bowel Cancer NZ charity match which was Round 17 of the Auckland Rugby League (ARL) SAS Fox Memorial Rugby League Competition at their home ground at Prince Edward Park, Papakura with coverage by Maori Television.

Before, during and post this match the Papakura Sea Eagles sought donations from supporters, the general public and the local business community and also held a PSERLSC Bowel Cancer NZ charity dinner attended by past and present Rugby League celebrities, officials and supporters.

A number of the celebrities gave generously of their time at no cost and particular mention goes to Richie Blackmore (rugby league) and Simon Mannering . They also received many gifts of Rugby League memorabilia to auction on the evening of the dinner which was a “sell out” event.