Hike for Health an emotional tribute 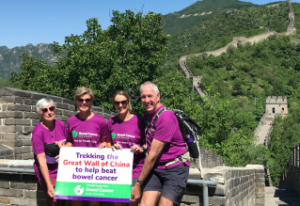 This May, four amazing people all who had lost someone incredibly important to them due to bowel cancer, trekked the Great Wall of China. Ngaire, Jo, Sarah and Steven spent 9 fantastic days on the adventure of a lifetime, after fundraising over $30,000 for Bowel Cancer New Zealand.

One member of the group, Sal Cannan, was sadly unable to make it at the last minute due to a death in the family, but her fundraising contribution was huge. Ngaire Skelton said, “This trip has been beyond awesome. Such a fantastic place and with inspirational people. I highly recommend it.”

The trip started in Beijing, but the group didn’t delay in starting the trek of the Great Wall along remote, unrestored paths, between mountains, through local villages and across rolling farmlands. The team enjoyed the many facets of the Great Wall, deciphering the ancient stories and poems etched into its watchtowers, every brick seemed to tell a story of war and adventure. “We are having such a blast here, and the Bowel Cancer NZ team are so fab, going great guns!!  It’s been emotional at times thinking of those we loved and lost through bowel cancer I must say. Louise and Ruth are most definitely walking alongside us,” said Sarah Whetter about the experience.

They were able to immerse themselves in the ancient history of this World Wonder, exploring Beijing’s Forbidden City and the Temple of Heaven, as well as experiencing the poignancy of Tiananmen Square.

A huge thank you to this amazing team of people who just blew us away with their passion for raising awareness and funds for bowel cancer.

Sounds amazing doesn’t it?! Well you’re in luck, later this year we’re launching another trip to the Great Wall in September 2020. 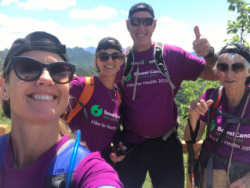 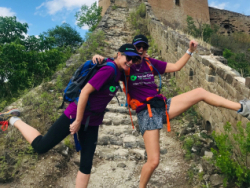