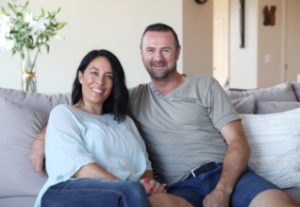 Former Black Caps fast bowler and cricket commentator Simon Doull and his wife Liana have become Bowel Cancer NZ ambassadors because bowel cancer has touched their lives in many ways. Simon’s parents both died of bowel cancer and Liana was just 36 years old when she was diagnosed with bowel cancer in 2014.

“At the time, it was a huge shock,” says Liana of her diagnosis. I’d had no obvious symptoms, apart from being extremely tired all the time, but my life was very busy.” Liana says she’d gone to see her GP for something completely different – she’d found a lump under her arm.

During a conversation with her doctor, he asked if her bowel habits were normal. Her ‘normal’ apparently wasn’t that normal says Liana. Sometimes she wouldn’t have a bowel movement for eight to ten days, and sometimes it would be three to four times a day. “That was quite normal for me but my GP thought it was worth having a colonoscopy.

“He referred me to a specialist, so I went to see him. It didn’t seem urgent though, as I had no bleeding or any of the usual suspects. Even the specialist thought that having a colonoscopy at my age was a waste of time – he thought I was way too young to have bowel cancer. But I thought, ‘well, you’re here, may as well go through with it’. “

Liana did go through with it and the news wasn’t good. “The specialist came in straight afterwards and said the prognosis didn’t look great.” What followed was a whirlwind of operations and tests. “The specialist rang two weeks later and said it was cancerous. He wasn’t sure if I’d be left with a (colostomy) bag and how much bowel he’d have to remove – it was very scary.”

“Your life changes from that moment…”

Liana was in hospital for two weeks and had just under half of her bowel removed. On the upside, she didn’t need a bag but she says, “your life changes from that moment, regardless of the outcome. People don’t talk about what you’re left with afterwards – you’re constantly worrying and checking to make sure your bowel motions are normal.”

Liana says she became quite depressed. “I had four kids, two of whom were very little – it was a really tough time. Six years later, I’m here and have moved on to two-yearly colonoscopies. Now, I feel very blessed – I’m a lucky lady. When I was diagnosed, it felt like a death sentence, but you get to the first year, and you think, ‘I’m okay – I can do this’.”

Liana met her future husband, former Black Cap, Simon Doull, in hospital while he was having shoulder surgery and they hit it off straight away. “To be getting married again after having bowel cancer, I was really scared of what might happen in the future. But Simon is the most amazing human on the planet. He looks at my scars and says ‘you’re a warrior’ – that they’re badges of survival. I’m forever grateful that my body told me that something wasn’t quite right and that my GP pushed me to have a colonoscopy.

Bowel cancer takes such a back seat here in New Zealand,” says Liana. “There’s so much information about other types of cancer, but people don’t like talking about their toilet habits”. In fact, her specialist apologised to her later. “He said ‘I just don’t see people like you in my waiting room’.  That’s why if there’s something I can do that helps another young person get their symptoms checked earlier, then I’ll be happy.”

Simon’s Dad died around five years later in 2002. “He died 18 months after having a colonoscopy and operation. He originally went to the doctor about something else and the doctor recommended he have some tests done. When the diagnosis came back, it was a real shock.”

Simon now gets tested every two years to ensure that any early signs of bowel cancer are caught early – while it’s still treatable. “Liana’s such a great story of survival. Not everyone gets to experience that,” he says. “Everyone talks about the negative sides of bowel cancer, but not the positive. It’s not always a death sentence – if it’s caught early enough.”

Simon and Liana say they’re honoured to be ambassadors as they’re both passionate about raising awareness, so that more New Zealanders talk about bowel cancer, get checked regularly and have stories of survival to share.

“If this story affects just one person – or changes one person’s life – that for me is massive,” says Liana.