Mary’s story: from survivor to supporter 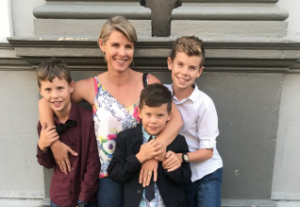 “Every donation we get has the potential to save lives. Thank you.”

Mary was aged 28 and had just had her first son, when she noticed a lump in her stomach. She had been feeling very fatigued and anaemic, but put that down to post-birth symptoms. Her doctor recommended an ultrasound , which led to a Stage 3 diagnosis where cancer was found in her bowel and lymph nodes. “When you hear the word ‘cancer’ you think ‘I’m going to die’, says Mary. “But I pretty quickly went ‘how can I beat this?’”

Mary bounced between public and private hospitals to get the treatment she needed including one of the toughest chemotherapy treatments of all. “The side effects were awful – and they accumulated with every treatment. I had a lot of support: my parents and parents-in-law took turns moving in to help with the baby.”

Six months later, Mary thought she would be “good to go” but scans showed a cyst on her liver. So she had a liver re-section very soon after the chemo. “It really knocked me,” she says. “I had some complications, but eventually, finally, everything started coming right.”

Now, nearly 14 years later, Mary has had two more sons and is officially a bowel cancer survivor. “When you get to the five-year milestone, you know you’ve beaten it. It was a great milestone to hit.”

In 2010, she was invited to become a founding member of Bowel Cancer New Zealand. “At the time, there was no charity for bowel cancer. It’s the second biggest cancer killer in New Zealand, yet no one was advocating for bowel cancer or working to increase awareness of the symptoms. There was no money – we were all volunteers.”

“Bowel cancer is treatable if it’s caught early,” she tells us. “I get so angry at the injustice of it – so many people have died of this largely preventable disease. There’s a real silence in the over 50’s – as we say, you won’t die of embarrassment, but you can die of bowel cancer.”

“I work for Bowel Cancer New Zealand because I know we can make a difference. I want to be sure that my children, and my children’s children will be free of bowel cancer. Every donation we get helps to make this possible – and has the potential to save lives. Thank you.”