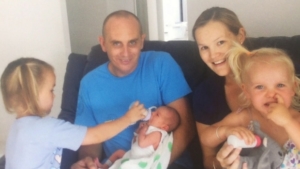 Craig has shared his story with us after his beloved sister Megs passed away in 2013 from Bowel Cancer just 6 weeks after having her third beautiful daughter. Craig and his family would like to raise awareness of bowel cancer as they do not wish any other families to go through this tragedy.

“Megs was a fit, fun, loving, caring and devoted wife and mother of 3 beautiful girls aged 4, 2 and 6 weeks when she tragically passed away from bowel cancer at the age of 31.

She was diagnosed with bowel cancer a day after the birth of her third baby girl and 45 days later she passed away leaving not only a devastated husband and three young girls but also heartbroken parents, two brothers and a large group of extended family and friends.

From memory, Megs was feeling tired and had abdominal pains during the last trimester of her pregnancy. She visited different doctors, and her symptoms were put down to “late pregnancy issues”. Bowel cancer wasn’t even mentioned as a possible diagnosis leading up to the birth, so we were all completely shocked when the diagnosis was made following the joyful occasion the day before of welcoming a beautiful baby into the world.

As you can imagine the weeks following diagnosis were an emotional roller coaster for everyone. None more so than Megan herself, as she somehow came to terms with what was happening with a dignity that still astounds me and everyone who spent time with her over that period in hospice care”.

A huge thank you to Craig who has raised an amazing $5,000 through our fundraiser Decembeard and by auctioning off a gorgeous, handmade coffee table.