Never Too Young campaign to run again in August 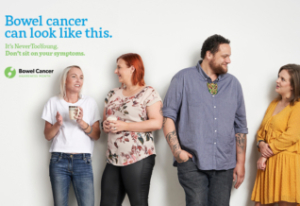 For the last two years, a group of younger bowel cancer patients and survivors has put together a nationwide, awareness campaign highlighting that you are never too young for bowel cancer, and the impact it has on the whole family.

We’re really pleased that the Never Too Young campaign will run again later this year. However, this year’s campaign will hit a very sad note with two of the original team missing. Anaru Gray and Britt Mill (nee Chambers) have both since passed away, leaving a very big gap in the lives of those who loved them, and in the campaign group.

Our community ambassador, Chelsea Halliwell, who helped to put the campaign together, says that running the campaign again is a tribute to Anaru and Britt. “Anaru was just 40 when he died, and Britt only 33. For both of them, delayed diagnosis was the difference between survival and a life sentence,” she said.

“Both of these wonderful people wanted their story to continue to be told, so that others don’t have to go through the terrible sadness that they and their loved ones have had to experience. It is our honour to respect their wishes.”

New Zealand has one of the highest rates of bowel cancer deaths in the world, and it’s hitting younger adults too. Every year, more than 300 people under 50 are diagnosed with bowel cancer, nearly as many as the national road toll.

Unfortunately, younger patients are often diagnosed when it is too late for effective treatment. The problem? They can be considered too young, too healthy, too fit and remain undiagnosed for months or even years before presenting with advanced bowel cancer.

Read the personal stories of the people in the Never Too Young Campaign at www.nevertooyoung.org.nz