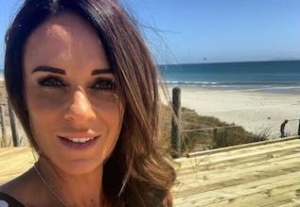 “You know your body best out of anyone in the world, so if you think that something could be wrong go and see your GP straight away.”

Rachael Ferguson is currently battling bowel cancer at just 32 years old. The self-described gym bunny and newlywed had no red flags until prenatal blood tests revealed she was anaemic. She visited her GP last year because she and her husband were planning to have a baby, and a preexisting blood condition meant she would have to switch her medication. After Rachael was sent for a blood test, it came back she was severely anaemic and had incredibly low iron levels.

It was then she realised she had recently noticed a little bit of blood in her stool. When she told her doctor the blood was bright red, they sent her for a flexible sigmoidoscopy, which looks at the lower part of a person’s colon. “She just said, I don’t think there will be anything wrong, but if I were in your position I would like to know,” Rachael said

“Unfortunately, with a camera in my rear end, I found out I had cancer that had been sitting in my rectum for quite a significant amount of time. You almost feel like a fraud. I found out feeling totally fine. To learn that you have got something quite seriously wrong with you, it’s very difficult to get your head around.”

“Originally, the surgery this February was only to do the resection of my bowel, but a closer look at a spot on my liver from the original MRI – and then I had a follow-up MRI – showed that spot on my liver looked like it could’ve been cancer,” Rachael says.

Surgeons removed all the tumour and spot, and were satisfied the margins were clear. She is currently undergoing the mop-up chemotherapy suggested. “I’m just grateful for my GP, otherwise maybe eight months down the track I could have fallen really ill and at that point things would be pretty dire for me.”

As a healthy 32-year-old, Rachael says the diagnosis came as a shock, especially given she had next to no symptoms but found out the cancer had been in her body “for multiple years”. Her diagnosis of rectal cancer at a young age was a huge surprise.

Not long after Rachael was diagnosed, all she wanted to do was create more awareness around bowel cancer. If that meant saving at least one life, that would be amazing. Catching onto bowel cancer early is key and if she can raise funds so that it’s possible for others, Rachael’s all in!
“Bowel Cancer NZ are doing amazing things and we need to keep this up! For the month of June, my team mates and I are going to Move our Butts by doing 100 of any exercise we choose a day, for 30 days. That’s 3000 moves (each) for the 3000 Kiwis diagnosed each year with bowel cancer.”
Join up today and join Rachael’s team Stepping OUT cancer!
Share
Tweet
Share
Reddit
Share