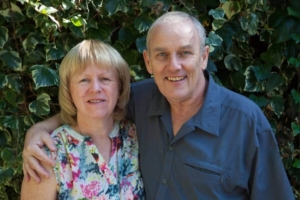 My name is Scott McDougall. I am 58 years old. I have been married to Mary-Helen for 37 years and we have two children.  We have three young Grandchildren who live nearby so we get to see them frequently.

I have been a Detective with the New Zealand Police for nearly 26 years. Sadly I have just retired due to my illness.

In August 2014 I was diagnosed with stage 4 bowel cancer, which had spread to lymph nodes up the left hand side of my body to my neck.

Until I felt the lumps on my neck there were no obvious signs of the illness apart from a general loss of appetite and lack of energy.

My father died a few days after surgery for bowel cancer in 2011. If there had been a national screening programme available I would have been a good candidate and perhaps my situation would be different today.

It was such a terrible shock to be told my illness was terminal and if I did not respond well I could expect to live for 12-18 months. It certainly puts everything into perspective.

My family and friends rallied round and provided tremendous support. My employer was absolutely brilliant and I immediately stopped work on full pay to receive treatment.

After having a portacath inserted I began chemotherapy straight away.  The nurses and staff at Waikato Hospital were awesome. They gave me hope and encouragement and I began to respond well. I would visit the hospital every two weeks for treatment and spend the next two days at home with my “takeaway” chemo bottle.

Each scan seemed to be an improvement and I remained positive throughout.

A minor setback in December 2014 saw me admitted to hospital with a pulmonary embolism. I am grateful to my wife who insisted I see the Doctor as I was convinced it was just a pain that would go away. The lesson learnt that day was to do as I was told and not argue when others could clearly see there were issues.

I returned to part time work in January 2015 and was feeling good. In April I had to undergo surgery to remove the tumor, which was at risk of blocking the bowel. For me that had a tremendous psychological impact. It felt good that what started this whole thing off was out of my body. I recovered well from the operation and was soon back at work.

I continued chemotherapy each fortnight throughout 2015. I tried not to let it disrupt my life too much and on good days would make sure I did something as a family so it felt normal. We even had a visitor from UK and in between chemo sessions we visited Northland, Taupo and four days in Kaikoura. Obviously some days were better than others but I felt it important to try and lead a life as normal as possible.

I think I had about 33 sessions of chemo up until February 2016. My latest scan was very encouraging and a decision was made to stop chemo as no cancer could be seen.

I always know it would eventually come back but I was hoping for a long period of remission.

It was with a great shock to discover in April 2016 that the cancer had come back in a very aggressive manner. My liver was affected as well as lymph nodes and omentum.

My oncologist broke the news to me in a very caring and compassionate manner. He is a wonderful man who I have the utmost respect for. In my job as a Policeman I have had to break bad news to families, which is very difficult and upsetting. I could not imagine having to do that on such a regular basis as he does.

My family, friends and colleagues were absolutely devastated after having fought such a huge battle that I appeared to be winning.

It took several days for me to get my head around the situation. I was told to put my affairs into order and consider taking my pension.

A decision was made on medical and financial grounds to retire from the Police. I now feel good about this decision and look forward to what time I have left being quality time with family. If I see Christmas I will be grateful but I intend to remain positive.

I look upon this as round two of the fight against this terrible disease. I think I won round one on points but this will be a harder fight.

I have now started a new chemo programme and have had three sessions.

Already I feel much better and I am convinced I can beat this again. I am due a scan very soon and I am sure it will show an improvement.

I look forward to early retirement and I have lots of plans to keep myself busy.

Photography is my passion and I intend to get out and about whenever I can and enjoy this beautiful country we live in.

**It is with deep sadness that we farewell Scott McDougall who died peacefully at home, on Saturday 3 September 2016.  Scott and his wife Mary were very generous in allowing us to share Scott’s story to help raise awareness of bowel cancer.  Our very best wishes and condolences go to Mary and her family.  Rest in peace Scott **