Tamsyn’s story: Moving her butt to inspire others 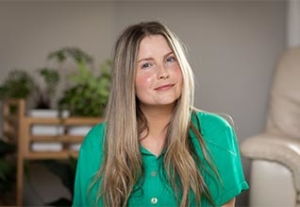 “I have a great appreciation for my scars – they’re beautiful proof that I am alive and I’m here.”

At just 31 years old, Tamsyn was diagnosed with Stage 3B bowel cancer in August 2020. She had suffered from Inflammatory Bowel Disease for 22 years, and initially thought it was further symptoms of the IBD. “At first, I thought it was a flare up – a bad one, I definitely knew something was really wrong though.”

In some ways, the operation has had a silver lining for Tamsyn. “I’ve had inflammatory bowel disease since I was eight years old. Since my surgery, I don’t feel the chronic pain that I used to feel every day – it’s strange how you become so used to that, it becomes the norm.”

Ten days after her surgery, Tamsyn started an egg freezing process. “I had to inject my already very sore tummy with hormones. My emotions were all over the place because of the hormones, so it was really challenging, but I’m extremely glad that I did it, as I was able to freeze two mature eggs. Then soon after, I started chemotherapy – Stage 3B means that the cancer has wiggled its way into the lymph nodes, so they need to make sure it’s gone.”

Tamsyn couldn’t stomach the first type of chemotherapy they put her on. “I couldn’t stop vomiting and ended up in an ambulance. It was really quite scary and hard as I didn’t want to give up on that chemo, but knew I would die if I stayed on it.” She changed to another type of chemo, but had symptoms of neuropathy, meaning the nerve endings in her hands and feet were affected. “I couldn’t feel anything and kept dropping things.”

“I’m now on a more tolerable chemo, for six months, then after that, I can have a rest and heal. There is also hope that my ileostomy might be reversed after that, but who knows. I try to roll with the waves – life is very unpredictable.”

Despite a lifetime of pain and the extremely tough few months behind her, Tamsyn is amazingly positive and resilient. “Of course I’ve cried many tears, but I actively choose to be happy and positive,” she explains. “I’m not grazing over the fact that things are tough – but it’s really nice to be able to enjoy the little things.”

Despite going through chemo, Tamsyn is planning to take on the Move your Butt challenge to raise awareness and inspire others. “I’ll definitely do something every day, such as yoga. I actively try to exercise each day, even when I’m feeling bad, even if it’s just for five minutes. It’s good for both my mind and body to keep moving.”

“Bowel cancer can be hard to talk about as it’s kind of ‘taboo’, and for many people, having these conversations can be challenging. I was lucky that I was already comfortable talking about these things. It’s so important to listen to your body if something different is going on – early detection is hugely helpful in terms of fighting the cancer.”

Tamsyn has been active on social media throughout her cancer journey. “I’ve been sharing my workouts and trying to inspire others by choosing to be active. Initially, I was quite scared to share my journey but I’ve had a really positive reaction, which I didn’t expect. That going through something so dark can also spread so much light is truly beautiful. It’s amazing being able to share my journey and inspire others in a positive way – and that they feel comfortable enough to talk to me.”