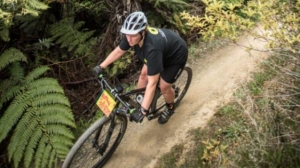 A woman who biked through right through chemotherapy will take on one of off-road cycling’s ultimate challenges – the Karapoti Classic.

She is one of two proteges mountain-biking physician Kim Hurst has taken on to help promote the sport to locals, after inviting applications on her facebook page.

The other is newbie mountain biker Gen Woods, who is more used to his motocross bike.

In July 2014, at 36 years old, Sullivan was diagnosed with stage three bowel cancer.

Her treatment began with initial chemotherapy, two rounds of surgery and then another six months of chemotherapy, which ended in June last year.

“I kept riding as much as I physically could,” she said.

“I was doing cyclo-cross even with a picc line in.”

A picc line is a fixed catheter tube into a vein allowing chemotherapy and other drugs to be readily administered without the need to insert a intravenous line each time.

It was hard going through the fatigue of chemotherapy but Hurst was a constant encouraging factor, keeping her motivated, she said.

Sullivan’s coach Lisa Morgan and Hurst visited her in hospital.

“By the way, we’ve set up for the Tour de Whiteman’s next year,” they told her.

Sullivan rode the 25km Whiteman’s event on the anniversary of surgery and then, a week later completed the six-hour Women of Dirt event.

She said chemotherapy was exhausting and even six months later, she is only able to work part time in her job as an occupational therapist.

“I can cope with most things and the motivation, but I still get the fatigue,” she said.

Hurst escorted her two charges around the Karapoti course a week ago,

When they got to the final hill, Doper’s, Sullivan was flagging but Hurst was there to help out with a push.

“That last hill was definitely when my body was saying ‘no, that’s it’,” Sullivan said.

“It’s not as hard as cancer but it’s pretty bloody close.”

“Kat’s in for a long day out – it will take her about six hours,” she said.

The Karapoti Classic will be held on Saturday, March 5.

The Karapoti Classic is a major event on the world mountain-biking calendar held in Upper Hutt for more than 30 years and in 2013 Hurst became the first local to win.

Many locals had spoken to her about the event.

“It struck me that lots of them have never ventured up into the Akatarawas,” she said.

She decided to help a couple of locals into the sport and called for applications on facebook, on the condition they lived in Upper Hutt and had never done the race before.

As a cancer patient Kathy Sullivan was an automatic choice.

Motocross racer Glen Woods offered 11 different reasons why he should be the other.

Last weekend, Hurst escorted them around the course in separate groups.

Woods kept more experienced riders honest and had no problem with the infamous rock garden.

Sullivan found it more difficult and felt the residual effects of her treatment, she said.

“It has been a good reminder about how pleasurable it is to share the sport of mountain biking with others who haven’t done it before,” Hurst said.

Karapoti is the hardest 50km bike race Hurst has ever done, she said,

“but if you break it down you can achieve it”.

The cameraderie of off-road riders would help Sullivan and Woods get through, she said.

“The good thing about mountain biking is that you can always take it at your own pace.”