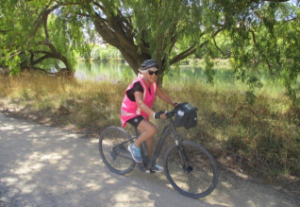 “Our generation isn’t very good at discussing bowel cancer or even thinking about it.”

Ann Bradley is adamant that she’s going to participate in Move your Butt month – partly for her fitness, but primarily to help spread the word about the symptoms and getting checked early enough. “I’m 74 years old and I have three friends affected by bowel cancer – unfortunately, some secondary. Our generation simply isn’t very good at discussing it – or even thinking about it.”

“So I’m going to walk 30 minutes a day five times a week, and also do some more biking in the weekends. I’ve just done 360 kilometres by bike in the South Island, so I thought, well, I’ll just keep going.”

Ann’s life was turned upside down by bowel cancer, when her daughter-in-law, Mary, was diagnosed with it nearly 12 years ago -she was just 28 years old (see Mary’s story). “I had never even thought about bowel cancer until Mary was diagnosed,” she says.

Ann and her husband supported Mary throughout her cancer journey, spending every second week in Auckland to help Mary with her then baby son. “It was a very difficult time – our first grandchild had just been born, then next thing, we were told that Mary had bowel cancer. So we dropped everything and went up to Auckland from Hamilton every second week to help out, alternating with Mary’s parents.”

Ann says that back then, doctors didn’t think Mary had bowel cancer initially because of her young age – but “thanks to Bowel Cancer New Zealand’s advocacy work, there is more awareness now of symptoms. Hopefully people are more likely to get their symptoms checked out earlier”. Mary has been cancer free for just over 10 years and Ann and her husband now have three more lovely grandsons.

“I’m taking on the Move your Butt challenge to support Mary but also to raise awareness, especially amongst my age group –mid to late 70’s. People find it embarrassing to talk about bowel cancer, but it’s so important that we do.”